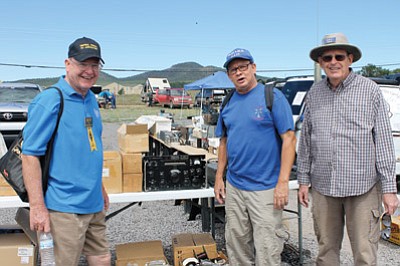 WILLIAMS, Ariz. - The parking lot at the rodeo grounds was filled with cars last weekend, many sporting multiple two and three-foot-long antennas. The vehicles belonged to attendees of the 2015 ARCA/Williams Hamfest, an annual event for amateur radio enthusiasts.

Inside the grounds, many attendees wore caps and badges with their personal radio IDs, or "call signs."

About 100 people milled about the tables displaying radio gadgets and accessories. Many of the attendees were seen catching up with other operators and visiting with friends.

One attendee was 62 year-old Jim Chaney from Prescott. He has been a ham operator since he was 14-years-old.

"Back then (when I was a kid) there was no internet, no Gameboys, this was it," Chaney said.

Chaney owns a solar system business in Prescott. He travels around the world installing solar panels and solar systems.

Amateur radio has been around since the early 1900s.

It is a method of wireless technology they uses radio towers over a wide frequency spectrum.

An operator, known as a "ham," must be licensed to operate communications equipment over the public airwaves. The Federal Communications Commission (FCC) reserves radio frequencies known as the "Amateur Bands" for use by hams. These bands are short-waves that bounce off the ionosphere from the transmitter to the receiver's antenna sometimes utilizing repeaters. Ham operators can use voice, Morse code, or digital modes to communicate.

According to the American Radio Relay League, there are approximately 675,000 amateur radio operators in the United States, and 2.5 million around the world.

Providing emergency communication is the top reason to validate amateur radio in the eyes of the FCC. Amateur radio has been relied upon during natural disasters when events like hurricanes or tornadoes disrupted telephone and cell phone systems. It can also be used in remote locations without cell service. Operators were called upon during the 9/11 terrorists attacks, Hurricane Katrina and the 2013 Colorado floods.

When Chaney isn't in Prescott, he lives in the Phillipines with his new wife. He is helping to set up an amateur radio operating system there.

"It's not just a hobby, it's a life line for them," Chaney said. "They got hit the last two years in a row by super typhoons. I'm going to work with the club there to put up solar systems to help out."

Amateur radio has been useful in Arizona as well. In 2010, Yavapai County amateur radio operators in Prescott intercepted a distress call on a popular radio frequency. A Phoenix Boy Scout leader had sent out a request via his hand-held radio for help for a sick boy scout in the Pine Mountain Wilderness Area in western Yavapai County. Jim Zimmerman, heard the distress call and contacted local emergency officials who responded with a rescue helicopter and evacuated the boy.