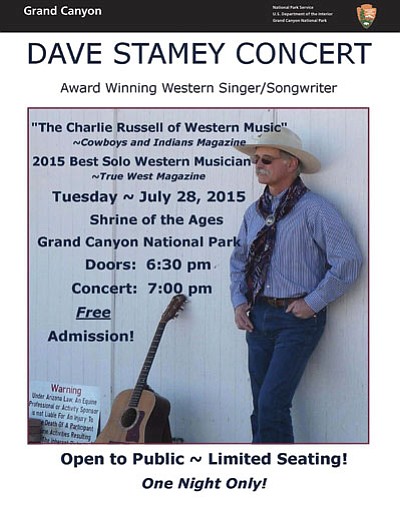 Western singer and songwriter Dave Stamey will provide a free concert at Grand Canyon's Shrine of the Ages on July 28 at 7 p.m. Photo/NPS

This concert is free and open to the public.

Dave Stamey, a former cowboy, mule packer and dude wrangler, now delights audiences as one of the most popular western entertainers working today.

Grand Canyon National Park will host Stamey as a way to say thank you to the ABCS participants for their week of hard work and active citizenship at Grand Canyon.

Participants in the ABCS program work alongside Grand Canyon National Park's wildland fire crew from July 26 to July 30. This training is designed for student leaders from various universities who will facilitate hundreds of alternative breaks across the country. Alternative breaks provide students with an opportunity to work with communities and agencies in a weeklong service and immersion program.

During spring of 2015, 82 students from eight colleges and universities spent time supporting the wildland fire crew at Grand Canyon.

Dave Stamey will reward the hard work of the ABCS participants with this free concert and Grand Canyon National Park invites the public to join in the fun.