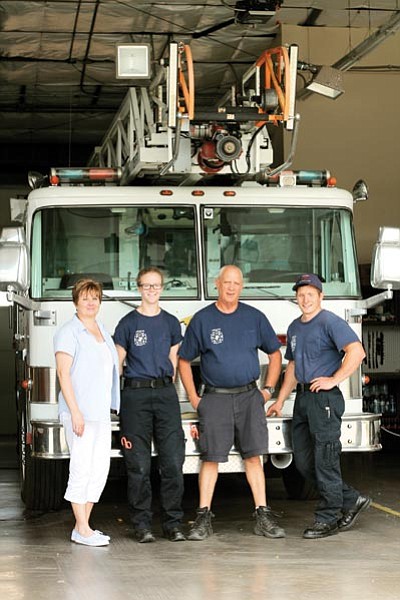 TUSAYAN, Ariz. - Tusayan Fire Chief Robbie Evans is pulling up his stakes in Tusayan and going on a cross-country road-trip with several life-long friends. The trip will take him to his new home - a cabin tucked away in the Allegheny Mountains of New York.

Evans has spent the last 17 years living and working in Tusayan - he has been the fire chief since 1999. Now, Evans said he is looking forward to getting back to the east coast.

Evans was born in the Allegheny, New York area and recently bought a 1,200 square foot cabin on five and a half acres. The cabin sits in the heart of the Allegheny Mountains, at the end of a dead-end dirt road - Evans said it is perfect, with little traffic and space to spare. In September, he plans to finish a few leftover renovations and move into the cabin with his mother.

Even though Evans, 62, said he would like to slow down a little and plans to hunt and relax at his cabin, he is already working on community involvement that could lead to a part-time working/volunteering position.

"They (Allegheny) have a fire department, I think the town's about 9,000 people," he said. "I've already talked to the guy who runs the EMS program there and they only have two paramedics, so I thought that would be a good way to get my foot in the door."

In addition to working and volunteering, Evans said he is considering teaching paramedic courses.

"I'm a certified instructor through Coconino Community College for EMT," Evans said. "Once I get my foot in the door and get to know some people, I'm pretty sure I can get back into teaching, if I want to. I just don't want to work like I do now - every day, 365 days a year for the last 17 years."

Over the last 17 years at Tusayan Fire Department, Evans said he has had many challenges and accomplishments. Evans, who became fire chief in the summer of 1999, has also seen the department grow.

Starting off the department had one fire truck and three volunteers, they now have six full time employees, one part time and 11 volunteers and have three engines and a rescue vehicle.

"I think we did 18 calls that first six months, now we do that many a month - on a slow month," Evans said.

Over the years, keeping volunteers at the department has been one of Evans biggest challenges.

"Volunteering just isn't like it used to be," he said. "It's just the nature of the Tusayan (and) Grand Canyon area, people just come for a little while."

"With the town's help (because) they're helping us with some of that, we can at least keep some volunteers and personnel on," he said.

Along with challenges, Evans said there has been many accomplishments along the way.

"I'm one of the old-timers," he said. "We've come a long way and my feeling is, it's a lot harder than it was 17 years ago. The best thing, I think, of doing this (job) is watching young guys and people going on. I think that's your claim to fame, as you go on through your life you pass it forward and watch these people go and make something of their life or their career. That's kind of the joy of teaching because all the fun of buying new (fire) trucks and going on the calls is exciting and fun and cool, but what's the long lasting impact?"

Protecting the town and surrounding areas against possible wild fire threats, through the Wildland Urban Interface grants is one of the most recent accomplishments for the department.

"We've protected the town of Tusayan for the next 15 years, I think, from any catastrophic wildland fires," Evans said.

After he leaves in September Evans said he will continue to work as a consultant for the department. Before he leaves, he plans to spend all of August training his replacement, Grand Canyon and Tusayan local, Greg Brush.

"He's been a volunteer on and off with us for the last 10 years," Evans said. "We wanted a working fire chief, a guy that's a paramedic and can run a fire call - he does. So I think they made a good choice."

Brush has lived and worked at the Grand Canyon for 12 and a half years and has been a paramedic for six years. Evans said it was important for the new chief to be familiar with the community and having commensurate experience and training - which Evans said Brush has.

"He has all the qualifications, he's a paramedic, has wildland fire experiences, structural training, fire instructor and inspector and safety officer (training)," he said. "I feel that it's time for new blood. You get into this thing where you look at everything the same way all the time and I think having someone coming in with a different perspective is a good thing. I think he'll do a good job."

Brush will start at the department around around Aug. 1. He said he is looking forward to the position and learning all he can from Evans next month.

"I just can't say enough about what an amazing job Robbie Evans and Lora Pitsinger have done over the years," Brush said. "I really hope to be able to fill some incredibly big shoes. I'm really honored to be asked to take the role and (I) want to continue on with the focus that they've had of supporting the community as much as possible and, of course, do everything I can to continue their work."