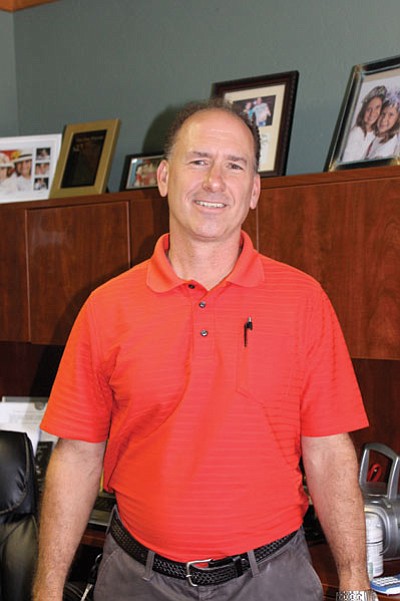 Pastor Joseph Oswald and his family moved to Williams from Surprise to pastor the congregation at FBC.

"It was sort of a dream come true to live up here," Oswald said.

Oswald was the pastor at Compass Bible Church in Surprise for the past 12 years.

"They are great people, it was hard to leave," Oswald said. "But we were just sensing the Lord was leading us out. We've always loved northern Arizona."

Oswald was born in Pennsylvania and raised in the northern Indiana town of Elk Heart. He was raised Roman Catholic but moved to the Baptist church in high school.

"I thank God for that upbringing." Oswald said. "I knew about God and prayed for the Steelers but I didn't have a true relationship with God until later."

Oswald has always loved sports and thought he would eventually have a career in sports broadcasting or journalism, until he befriended a high school teacher who took a special interest in him.

"He took time for me," Oswald said. "He loved people where they were at."

Oswald decided to attend Liberty University in Lynchburg, Virginia. He completed two years of his Biblical Studies degree and then switched to Arizona Christian University in Phoenix to complete his education. He also completed a minor in Spanish.

"I had a lot of Spanish in high school," Oswald said. "I have a heart for that, the Latino community. I have done a few mission trips to Mexico, I just need to practice it more."

Oswald and his wife, Kelly, have four children. Two are grown and live in the Phoenix area, and two will be attending Williams Elementary-Middle School. They have five grandchildren ages six months to 10 years old.

Sports and coaching are important to Oswald. He was a physical education teacher for Athlete's in Training for seven years while he was a pastor in Surprise. He worked in after school and homeschool athletic programs and sports camps.

"We had 600-700 kids each week that we taught at different parks throughout the valley," Oswald said. We taught kickball, soccer, flag football, basketball... we'd mix it up."

Oswald is excited to be in Williams and looks forward to ministering in the community. He believes that working with other churches is an important part of ministry.

"I love this little town, I'm kind of old school," he said. "I love the outdoors and what God has made. I love to be able to see blue sky... the mountains and to just be able to walk around and greet people. That appeals to me."