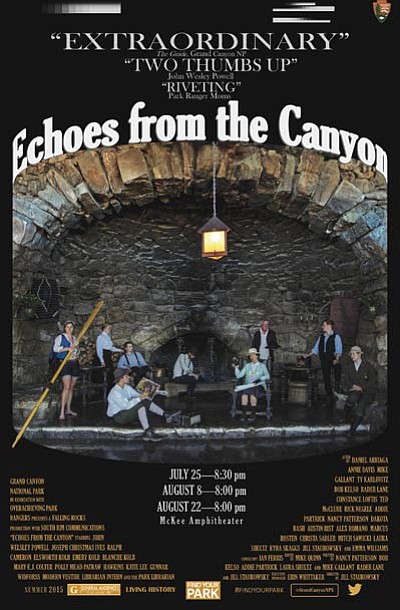 Echoes from the Canyon will premiere July 25 at 8:30 p.m. Photo/GCNP

The program, features park rangers, in character as historic Grand Canyon figures taking the stage. The event takes place over the course of three Saturday performances at the McKee Amphitheater. The performances will be in place of the regularly scheduled evening ranger programs.

This year the rangers will feature notable figures from Grand Canyon's past, including explorer John Wesley Powell, architect Mary Colter, naturalist Polly Mead and army Lieutenant Joseph Ives. Ives infamously suggested of the Grand Canyon region that "After entering it there is nothing to do but leave." Park rangers encourage visitors to stay for this exciting presentation and learn about some of the pioneers who helped shape Grand Canyon, making it the national park it is today.

Ranger and "Echoes" Director Jill Staurowsky said she hopes that this presentation will help the audience recognize the need for conservation in the National Park Service.

"By reflecting on those who have come to Grand Canyon before us and their relationship with this landscape, we can better understand our role in advocating for park preservation now and in the future," Staurowsky said.

All three showings will be held at the outdoor McKee Amphitheater on the South Rim. The event is free and open to the public.