Williams goes to the dogs 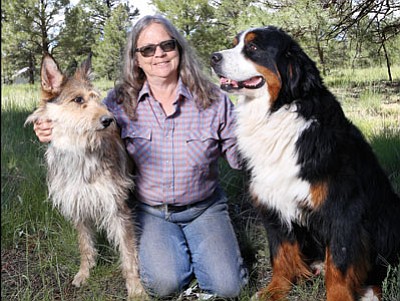 After 22 years putting on their annual American Kennel Club shows at Ft. Tuthill in Flagstaff, the club is moving their location to Williams July 18-19.

"This is a big move for us, and we're looking forward to it," said FKC Publicity Coordinator Nancy Sullivan.

According to Sullivan, the Ft. Tuthill site was becoming more difficult to use because of the heat and deterioration of the asphalt. The group began looking for a new location and Parks resident and FKC member Denise Dean suggested Williams.

"Everyone has been so welcoming here in Williams, including the mayor, the Chamber of Commerce, and Rose Newbold," Sullivan said. "We're excited about the grass and all the events being close together. People will be able to ride the train, visit Bearizona, and stay in nearby hotels."

Dean, a national confirmation judge, has raised Bernese Mountain dogs, English Sheep dogs and Berger Picard dogs in northern Arizona for many years. She is a member of FKC and has been the Dog Show chair for the last 30 years.

"Our numbers in the show began to drop over the last few years due to some of the problems at Ft. Tuthill," Dean said. "This year they are starting to come back up and we think it is because of the new location."

Dogs, handlers and owners from all over the country will be at the event, although most entrants are from the Southwest.

"The majority are from California, New Mexico, Colorado and Arizona," Sullivan said. "We have quite a few from Phoenix who want to escape the heat."

Approximately 1,000 dogs are registered for the show and will compete over a two-day period. American Kennel Club judges will evaluate confirmation and obedience trials each day.

"We have 110 different breeds entered in the show," Dean said.

Each breed competes in confirmation, obedience and rally trials. Each breed's parent club creates a standard, which is a written description of the ideal specimen of that breed which generally relates to form and function. Most standards describe general appearance, movement, temperament, and specific physical traits. The dog that is the best representative of the breed is awarded Best of Breed.

The winner of each Best of Breed will go into the variety groups to compete next. The variety event divides the dogs into groups such as sporting, herding, working, non-working, hound, toy and terrier. The winner of each variety group then advances to the Best of Show trial. The events are scattered throughout each day and a schedule will be posted at the event. The Best of Show trial will begin around 2:30 or 3 p.m.

"On Sunday, we do the same thing as Saturday except the judges rotate," Dean said.

Since the show is in Williams this year, Sullivan said the group is encouraging handlers to follow a casual western theme instead of the usual elegant dressing.

Spectators are encouraged to attend, although American Kennel Club rules prohibit unregistered dogs from the grounds.

"This is a great family sport," Dean said. "We have professional handlers who compete in upwards of 200 shows per year mixed together with family participants. Everyone can be together."

The show will have a variety of vendors at Cureton Park serving food and selling dog related products. Admission and parking is free. Show hours are 8 a.m. to approximately 5 p.m. More information is at www.flagstaffkennelclub.com.