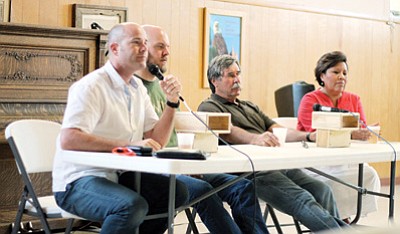 GRAND CANYON, Ariz. - On June 19 Sierra Club Executive Director Michael Brune hosted a panel of U.S. military veterans to discuss how nature and the outdoors have potential healing capacities for them.

For Brune having military personnel address these and other public lands issues is important.

"Sierra Club has had a long history with the military, and military leaders are a big part of who the Sierra Club is," Brune said during a recent interview with Arizona Public Radio's Gillian Ferris. "The connection that they have to nature is very similar to what other people experience from different walks of life, whether it's the pressure of little things like emails, or meetings, or conference calls, or the pressures of coming back from war, nature provides a valuable service to all of us. It gives us perspective."

Perspective is important to Brune as he discussed the possible designation of the Grand Canyon Watershed as a national monument with the veterans.

Kim Crumbo a Vietnam War veteran and nationally respected conservationist with the Grand Canyon Wildlands Council, was on the veteran panel, along with U.S. Army veteran Stacy Bare, director of Sierra Club Outdoors, who was named one of National Geographic's Adventurers of the Year in 2014 and Jamescita Peshlakai, a member of the Navajo Nation and a U.S. Army veteran who served in the Persian Gulf War and who has served in the Arizona House of Representatives.

Crumbo, who devoted his life to wildlife conservation, said in a recent press release by the Grand Canyon Watershed, that national monument status is crucial to protecting the wildlife and its habitat in that area.

For Bare, the monument is important not only for conservation and protection purposes but also for restoration and healing capacity the protected wilderness would provide for the public and veterans alike.

"If I could get 250,000 people a year outside or veterans outside, we would be good," Bare said. "There are a lot of organizations but it's how we let people know that it's okay to be messed up, it's okay to have some challenges."

"In the Sierra Club we always work to make sure that veterans are not 100 percent veterans on a trip, so they're building trust in a community," Bare said. "We welcome veterans from all generations."

Accordimg to Sierra Club Outdoors website, 'time spent in nature not only promotes mental health, emotional resiliency, and leadership development prior to deployment, it provides invaluable know-how to help returning vets enjoy and engage with nature upon returning from deployments.'

One of the goals of the Sierra Club Outdoors is getting veterans outside and ensuring they and their families have the support they need.

"Dealing with that suicide issues, we need to partner up with veterans from multi-generations that could teach us and that we could teach them," Bare said. "We need to go out into the community, so maybe they'll come to us. How do we do it quicker, I don't know, but again public lands is part of the solution and fighting for public lands."

During Brune's interview with Arizona Public Radio, Brune said one of the biggest issues the Sierra Club is working on in the Colorado Plateau area is the designation of the Grand Canyon Watershed as a national monument.

"To help protect the Grand Canyon Watershed," he said. "We have a world class resource that is not yet permanently protected, and so that's a missing piece I think in lands conservation for the state."

Brune recently took his family to the North Rim of Grand Canyon National Park to visit the Kaibab Plateau, where the Grand Canyon Watershed National Monument would be located, if it recieves that status.

"We have spent the last couple of days on the north part of the Kaibab Plateau," Brune said. "You all know this, but it is incredible. This is a global treasure that needs to be permanently protected. So that's part of the reason we are here...to hear about the Grand Canyon Watershed, but to do it through the stories from these (veterans) here."

For Bare the protection of public lands is one reason he went to war and he said is part of what he fought to protect.