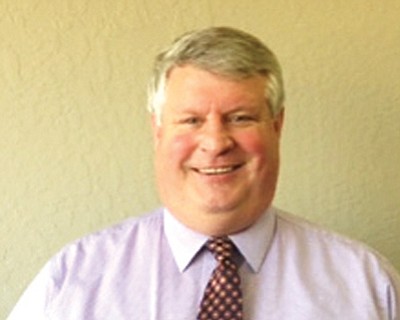 Arizona native, Eric Duthie is the interim town manager for the town of Tusayan as of July 6. Submitted photo

TUSAYAN, Ariz. - When it comes to job hunting knowing, what you want and the value of hard work is always a plus.

Recently, the Tusayan town council decided they like what they saw and hired Eric Duthie as the interim town manager for Tusayan.

Duthie has a variety of responsibilities and in the coming months - possibly years, those will include, among other things...ensuring town projects are started and completed, contracts are awarded, accounting for grants and funding for the town and advising the town council members. Duthie said he is up to the job and his resume backs him up.

"I think I bring a wide range of experiences to this position," Duthie said. "Not just, how do you make management decisions. I've had to live them."

Duthie is certainly not a slacker and his experience is broad.

Born and raised in Douglas, Arizona he became a police officer at 19, a feat that is close to impossible today, because most states require an individual to be 21 years old to be a police officer.

While on the police force, Duthie worked simultaneously as a firefighter with the local fire department. Eventually, he rose through the ranks and when he was in a position to become a police chief, he realized the town's current police chief was not retiring for several years. Duthie decided to switch gears and landed a city manager position in the town of St. Johns, Arizona. Five years later he moved to Taylor, Arizona as their town manager.

In addition to town management positions, Duthie has worked as a police commander and fire chief, the chief of police in Hayden, Arizona, a deputy sheriff for Cochise County and an adjunct instructor for Cochise College.

He holds a Bachelor of Science degree in Public Safety Administration and most recently worked as a consultant, loss control manager and government adviser with the Arizona Municipal Risk Retention Pool.

One of Duthie's recent operations was in Sitka, Alaska, where he explored options for improving emergency operations in the area.

"I have been able to conduct efficiency and effectiveness studies for different cities and towns throughout the country, mainly focusing on emergency services.

"I was recruited for that position as their loss control manager, so I dealt with 77 of the 91 towns (in Arizona) in every aspect," Duthie said. "I did just about everything you can think of in law enforcement from investigations to under-cover work to patrol to staff work, so it gave me a well rounded opportunity to see things."

Being well rounded in many fields gives Duthie an advantage and has already proved helpful. When it comes to Tusayan, so far Duthie is pleased with what he is seeing - especially in the sanitary/water districts and the fire district.

"It's very assuring to me to know that they are very competent and capable," he said. "I'm impressed with the districts here."

In comparison to other cities and towns Duthie said he sees Tusayan as unique, with one of its outstanding qualities being its capacity to offer a stable revenue that can sustain the town and its growth. He believes this is because of its high tourism industry.

"It's interesting from an infrastructure standpoint, there is none...obviously it's a brand new town. You don't have a police force, fire department - you don't own those as a municipality and that's a good and bad thing," he said. "Such a small community has such a large draw obviously from the tourism and that equates to dollars, so Tusayan is at a standpoint that is different from a lot of communities. There is an opportunity there to really build some things and to be able to put things in place for the future, where other places are restricted from because they don't have the funds."

Duthie said he plans to start immediately on familiarizing himself with the town's resources and what the concerns are in Tusayan.

He plans to start with the CDBG (community development block grants) projects, which include installing a restroom facility at the Sport's Complex Center. Additionally, he would like to figure out what the housing concerns are for the town.

"I know there's been controversy, there's been some conflict over ideas on how to get where and the processes," he said. "I want to just get an overview of that and see if we can bring people to the table and find a way to get things resolved and move forward as the council and people in the community want to move forward."

Getting things done, appropriately and in a timely manner, is what Duthie said he would like to see happen in Tusayan.

"I'm kind of impatient, I'm a doer and that's what I want to make sure happens here. I like to see things happen," Duthie said "I want to make sure the right decision is made, I want a well thought out, looking at the end of the road as opposed to just what it looks like tomorrow, but lets not spend 10 years trying to figure out what tomorrow looks like. Because then you're 10 years behind."

Being able to bring experience, ability and motivation to the table is how Duthie plans on resolving issues and completing projects.

"I have a wide range of experience, I'm not Superman - I don't claim to be. I'm not the smartest guy in the world, but I know a lot of smart people. What I do is, if I know the answer, I'll give the answer. If I don't know, I'll get the answer," he said. "I've been able to be around so long and work with so many people, that I know who to call. I'm hoping that I can bring that ability and some of those resources here, to help solve some of these issues that growing, starting out communities, have been experiencing and will continue to experience."

Duthie's wife is currently a teacher in Mesa, Arizona. They have seven children and 11 grandchildren.