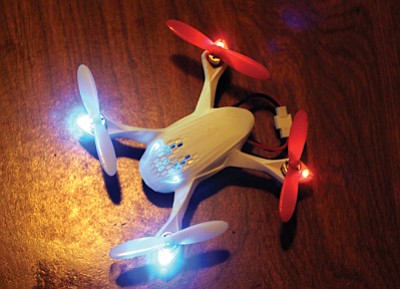 GRAND CANYON, Ariz. - On June 24 and 25, airtanker operations were suspended on the Sterling Fire and Lake Fire on the San Bernardino National Forest in California, after Unmanned Aircraft Systems (UAS), often referred to as drones, were detected in fire areas.

According to the U.S. Forest Service, the drones, flown by members of the public, were within or near wildfires and could potentially have harmful impacts to firefighter safety and aerial firefighting efforts.

"If a UAS is detected flying over or near a wildfire, we will stop airtankers from dropping fire retardant, helicopters from dropping water, and other aerial firefighting aircraft from performing wildfire suppression missions until we can confirm that the UAS has left the area and we are confident it won't return," said Steve Gage, U.S. Forest Service representative on the National Multi-Agency Coordinating Group (NMAC) at the National Interagency Fire Center in Boise, Idaho. "Unfortunately, this could decrease the effectiveness of wildfire suppression operations, allowing wildfires to grow larger, and in some cases, unduly threaten lives and property, but firefighter and public safety are our top priorities in wildfire management."

Forest Service and firefighting agencies stated their concerns that mid-air collisions could occur that could seriously injure or kill aerial and/or ground firefighters.

According to the Forest Service, Temporary Flight Restrictions (TFRs) are typically put in place during wildfires that require aircraft, manned or unmanned, that are not involved in wildfire suppression operations, to obtain permission from fire managers to enter specified airspace.

The Federal Aviation Administration (FAA), U.S. Forest Service, U.S. Department of the Interior and other wildland fire management agencies consider Drones to be aircraft and subject to TFRs.

Jacqueline C. Banks, public affairs officer for Kaibab National Forest said drone activity is not currently a concern for the Kaibab, however there has been an increase of drone activity nationally.

"We have not had any drone activity of concern on the Kaibab National Forest to date," Banks wrote in an email. "However, I know there has been some concern amongst fire management agencies."

The Forest Service recently put out an informational handout regarding drones and a public service announcement was recently released by the National Interagency Fire Center.

Galen Howell, an airplane pilot for Grand Canyon National Park and the Forest Service, said that while it is not a concern currently, a mid-air collision between an airplane and drone could cause extensive damage and has the potential to bring down a small airplane.

"If I collide with something, in the air, it's going to do a lot of damage," Howell said. "Just a small drone could damage a control surface significantly."

Howell, who has over 30 years flying experience, with seven of those years flying the airspace around Grand Canyon, said he regularly flies fire reconnaissance flights in a single engine Cessna 206, the Cessna weighs around 2,200 pounds - with an empty fuel tank.

"Even a small drone, a model airplane size, could do a lot of damage to a small airplane," Howell said. "Especially if it hit a control surface, because the cruise speed on an airplane like I fly, is about 130 knots and if it hit the windshield it could come through (the windshield). That's what happens sometimes when birds hit small airplanes, they could go through the windshield and injure the pilot."

One concern of the Forest Service is what would happen if a drone lost communication with its operator and fell from the sky.

"The probability of that happening is pretty low," Howell said. "I don't think that happens a lot, that's not as much of a concern, as far as we are concerned - our natural resource aviation program, we are conducting our mission, which sometimes is within several hundred feet of the ground and (are concerned, if) somebody has a drone that interferes with our mission."

While drone usage is becoming more popular in the private sector, the airspace around the Grand Canyon is restricted and drones are not allowed to fly into the park.

Since the Park Service has jurisdiction over the ground, it prohibits drones from landing or taking off in the park.

According to FAA guidelines, Drones must be flown below 400 feet and remain clear of surrounding obstacles. They cannot take off from, land in, or be operated from congressionally designated wilderness areas.

However, because of the low altitude restrictions on drones, the likelihood that drones could impact firefighting efforts increases.

"A helicopter, on a fire, is going to be a lot of times, at that altitude of 400 feet above the ground," Howell said. "The main concern is that when there is aerial firefighting resources out there, there shouldn't be a drone anywhere within the vicinity."

While drones could potentially affect firefighting efforts at the Grand Canyon and the surrounding national forests, there have not been any reported incidents.

"What there's an effort right now to prevent is people brining a drone in to try and take pictures of a fire or something," Howell said. "Then they interfere with the aerial firefighting activities."