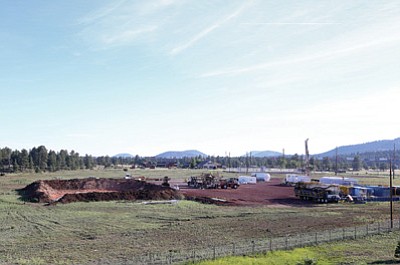 WILLIAMS, Ariz. - United Drilling is digging a second hole at the Sweetwater Well, located north of I-40 on Airport Road.

Drilling began approximately five weeks ago and workers had been making progress on creating the 4,000-foot well. However, at about 2,300 feet the contractors began to have a series of problems.

According to Williams Public Works Director Kyle Christiansen, the first problem began when workers noticed that no rock bits or particles were returning to the surface when drilling.

"The drillers pressurize the hole with water and foam which brings the cuttings to the top surface," Christiansen said. "When you don't get the returns then you've either blown into a large cavern or fissure."

"The money will put off fiscal year 2015 capital projects including street projects and waste water," he said.

United Drilling liaison Pat Carpenter said the workers sent a video camera down to investigate and found some wash outs or caverns in the formation between 300-500 feet that needed to be sealed off with concrete.

After they sealed off the caverns, United found the drill pipe had cemented into the concrete. As they were washing over the concrete, the cutter on the wash-over pipe fell in the hole. They built a specialized tool to fish the pipe out and were able to remove the piece of pipe. When they went to wash over the pipe again, it severed again.

After spending several days working on these problems, Carpenter, City Manager Brandon Buchanan, and United Drilling decided to skid the rig over and begin drilling another hole.

"It's costly to begin another hole," Carpenter said. "But continuing to fish is also costly."

Mayor John Moore said although there are some complications, there has been no indication of a lack of water at the site.

"It's just a mechanical issue," Moore said. "It's not something that happens every day, but it does happen. Unfortunately every time there is a new issue, its additional money."

Christiansen said that the problems with the Sweetwater Well are a setback, but the city is optimistic with the progress.

"We have a hopeful kind of schedule," Christiansen said. "That kind of thing takes on a life of its own."

The Rodeo Well is offline due to an equipment failure according to Carpenter.

Either a hole or corrosion of the pipe caused water production to slow at the well. Workers investigated and found that a coupling had split. As the equipment was being pulled out of the well, the pump, the motor, the seal section and 500 feet of cable fell to the bottom of the well.

"They're going to try to fish it out," Carpenter said. "If that doesn't work then they'll get video in to see where the equipment is and determine the next step."

According to Christiansen, Dogtown 1 and 3 Wells are in operation and working properly. The city reservoirs are full and the water situation is adequate for the town.

"We are monitoring the water situation closely," Christiansen said. "We have two operating well pumps currently and we're keeping up with demand. Of course, more rain and more water is great."