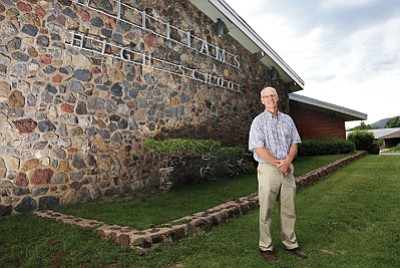 WILLIAMS, Ariz. - For Richard Honsinger, the community he works in is just as important as the school itself.

When Honsinger heard there was an open principal position at Williams High School he jumped at the chance to apply. Honsinger said that one of the draws is Williams itself.

"I see it as a place with people who are like me," Honsinger said. "It's a place I can get to know a lot more people and believe I will fit in well."

Honsinger worked at Mogollon High School as a math teacher and principal for the past 24 years. He and his family are deeply attached to the school and the Heber-Overgaard community and found it difficult to leave.

"I loved the people and I think I'd say that they loved me," Honsinger said.

Honsinger said that he and his wife had a short list of places they would ever consider leaving Heber-Overgaard for and Williams was one of them. When the job came up in Williams, they jumped at the chance to apply.

"When I saw the job open up I decided I wanted to go for this," Honsinger said. "I think I was the first one to have my application in. I wanted them to make sure that they knew I was looking for them not just applying around. I wasn't applying to a bunch of places and when the Williams job opened up I was ready."

Honsinger initially applied only for the high school principal position, but after the Williams Unified School District governing board saw his application they asked him if he was interested in a dual position as principal-superintendent.

"After they offered me the combination, I thought about it for a while and talked to some people," Honsinger said. "I decided to go ahead and give it a try."

Honsinger's wife, Linda, is an early elementary educator and was recently hired as a first grade teacher at Williams Elementary-Middle School.

Honsinger said his schedule would vary day to day based on the needs at the high school and district office, and he believes the success of the dual superintendent-principal role depends a lot on teamwork.

"From what I've seen we really have some good people who work here," Honsinger said.

Honsinger's leadership philosophy is based on supporting and encouraging those who work for him. He believes his strong points are working well with people and giving them ownership of their positions.

"I value them," Honsinger said. "I hope that will bring people together and see if we can move forward as a district."

Mogollon is made up of kids from a variety of backgrounds and Honsinger can see many similarities in the schools. He thinks a lot of people look at Mogollon as a model for a small high school. He said he sees similarities in Mogollon and Williams' schools and is encouraged to move forward in his new position.

"I think the number one goal I have for Williams School District is to make sure that we're all on the same page," Honsinger said. "When someone teaches third grade reading, then the fourth grade teacher knows what has been done and takes steps beyond that. If we do that I think we'll see grades go up."

Honsinger and his wife will celebrate 30 years together in August. Living near Prescott and Flagstaff was something both of them desired. Linda's mother lives in Prescott. Their grandson and two of their children live in Flagstaff where their youngest son is a student at Coconino Community College, and their daughter recently graduated from Northern Arizona University (NAU). Their oldest son is studying climate change in a graduate program at the University of Copenhagen in Denmark.

"I like Flagstaff, it's my kind of town," Honsinger said. "But I don't want to live there. (There are) so many lights, so much traffic. We wanted to move to Williams and live in town. I like the high country in northern Arizona, it's a lot like it was in Heber-Overgaard. I mountain bike, road bike and hike a lot. I hunt whenever I get drawn. So Williams just fits the bill."

Honsinger grew up in Los Alamos, New Mexico and followed his brother to Flagstaff. He decided to attend NAU and graduated with a bachelor and master's degree in Math Education. He moved to Heber-Overgaard to work for the Forest Service and then was hired as a teacher at Mogollon after two years. He worked 14 years as a math teacher and then returned to NAU for his Principal Certificate. He spent the last 10 years as the Mogollon principal with a little bit of teaching on the side.

"I still taught one class of calculus, even last year," Honsinger said. "Just because we needed it and if I didn't do it the kids wouldn't have had it. So I kind of hung on to one little bit of teaching all the way up to last year."

Honsinger spent many years at Mogollon coaching football, basketball and baseball. In the past Mogollon competed with Williams and Honsinger got to know many former and current Williams employees including Rick Shipley, Ken Edes, Phillip Echeverria and Johnny Hatcher.

"You get to know a town when you sit in their stands or play against their team," Honsinger said. "We played here an awful lot in the past."

Honsinger said the school board seemed interested in finding someone who wanted to plant roots in Williams. He said they were hoping to find someone who wasn't using Williams as a stepping-stone to another job, or was going to retire in a year or two.