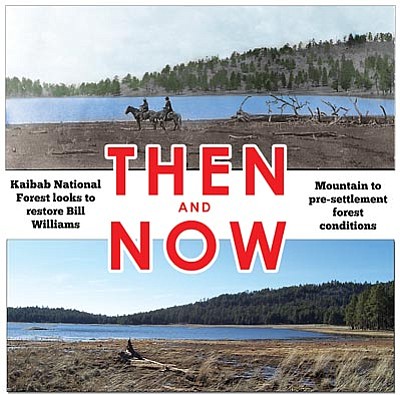 Coleman Lake, south of Bill Williams Mountain, in 1909 and currently. The Forest Service hopes to return the forest to pre-settlement conditions through the Four Forest Restoration Initiative. Photos courtesy of Kaibab National Forest

WILLIAMS, Ariz. -The Kaibab National Forest has recorded 366 fires over the past 40 years in the dense forest of Bill Williams Mountain and forest supervisors say it's just a matter of time before the residents of Williams experience a catastrophic fire in their backyard.

The solution may be near though because forest supervisors expect a late July approval of the Bill Williams Mountain Restoration Project Environmental Impact Statement (EIS). The approved EIS will allow forest workers to begin restorative treatments of thinning and burning in the overgrown forest. Forest supervisors have been waiting for The Bill Williams EIS to be approved since 2012.

Mike Uebel assistant fire management officer for the Williams District, said years of fire suppression and drought have left Bill Williams Mountain susceptible to a severe fire, and forest supervisors have been eagerly awaiting the EIS approval to reduce the hazard.

"Every year in the Southwest you hear the same story, of a community devastated over their mountain burning severely," Uebel said.

The approval of the Bill Williams EIS will allow forest service employees to begin treatment of the 15,200-acre area with mechanized equipment and prescribed fire.

"The district has looked for years at hazardous fuels reduction as a need to protect the community and things that are important to the community like the watershed and the mountain itself," Uebel said. "It's a very big task and at one point we said 'we have to take this on, we have to tackle it.'"

The 359 page collaborative document was developed over a two-year period. Kaibab National Forest put on an open house and sought public comment related to the project in 2012, which were considered prior to finalizing the EIS.

"The community of Williams has been so supportive of getting the work done on the mountain and that makes us very excited that we will soon be able to start," said Kaibab National Forest Public Information Officer Jackie Banks.

The National Environmental Policy Act (NEPA) requires an EIS for any actions that significantly affect the quality of the human environment. It describes the positive and negative environmental effects of a proposed action and ensures that the federal government adheres to the goals and policies outlined in the NEPA.

The Bill Williams Mountain Restorative Project is a part of the Four Forest Restorative Initiative (4FRI). The 4FRI spans 2.4 million forest acres across northern Arizona and is an effort to create landscape-scale restoration that includes reducing fuels, increasing forest health, and encouraging wildlife and plant diversity.

The first phase of 4FRI was approved in April 2015 and encompasses 600,000 acres on Coconino and Kaibab National Forests. Bill Williams Mountain was set aside by forest managers for special consideration due to the communication towers, historic and cultural properties, unique species and steep slopes.

"The consensus early on with 4FRI was to limit the scope of that analysis and work to slopes under 40 percent," said Timber Management Officer for the Williams and Tusayan Ranger Districts Micah Grondin. "The challenge of those slopes and different conditions really warranted a specific look at how to treat it."

Many residents remember the 2009 Twin Fire on Bill Williams Mountain that burned roughly 1,000 acres, closed local schools and required evacuation of 64 Williams homes. That fire along with the Eagle Rock Fire on Sitgreaves Mountain and the Schultz Fire on the San Francisco Peaks in 2010 prompted the need for immediate treatment of Bill Williams Mountain. The high-intensity wildfires of the Eagle Rock and Schultz fires led to flooding, erosion, and sediment problems as well as damage to landscapes and habitats. A child was killed in the subsequent flooding caused by the barren landscape.

"The Twin Fire was scary, but as far as what it did for the vegetation it was nowhere near what we saw with the Schultz fire or other Arizona fires," Uebel said. "You get a hot draughty day with some wind and with the fuel loadings that are up there...its (Bill Williams) set up for disaster."

Forest supervisors say that a catastrophic wildfire on Bill Williams Mountain could cause the same damage as fires such as the Schultz or Aspen Fires. The 2003 Aspen Fire in Summerhaven, Arizona burned 345 structures and caused $4.1 million in damage to electric lines, phone lines, water facilities, streets and sewers.

Uebel is concerned that a large fire on Bill Williams could affect the communication systems at the top of the mountain, silting of municipal water reservoirs, reductions in water quality from ash, loss of recreational areas, loss of wildlife habitat and the potential loss of lives.

Six watersheds begin on Bill Williams Mountain, including Sycamore and Hell Canyon watersheds to the south and east, Cataract Creek and Spring Valley watersheds to the north, and Ash Fork Draw and Upper Partridge Creek to the west. The city of Williams relies heavily on three of these watersheds to provide clean and abundant water to the local reservoirs as their municipal water source.

"The watershed is extremely critical to this town," Uebel said. "Drought years are scary for this town, imagine if we lost our watershed. When you remove the vegetation, you have silt coming off the hill into Santa Fe Dam and Buckskinner. The city water folks are also concerned about the amount ash that could get in the water."

Managers and stakeholders are concerned about any impacts to the Mexican Spotted Owl and the sensitive Bugbane plant population. The EIS proposes several alternatives to accomplish thinning and burning without affecting these species.

"From the beginning with threatened and endangered species, traditionally cultural property, communication sites, all these factors were going to make the environmental analysis long and difficult," Banks said. "But it is the right thing to do.

Banks said that once the actual implementation of the EIS begins, the community may see more traffic, some thinning activities on the mountain, and the effects of prescribed burning.

"There are going to be some impacts," Banks said. "But I hope the community will continue to be supportive and understanding when the work actually begins."