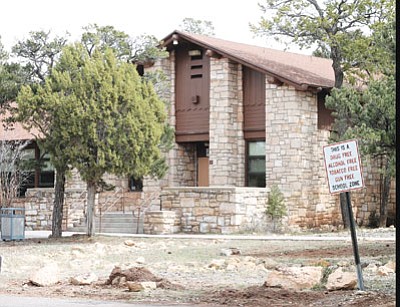 The review is conducted once every five years, and according to Arizona Director for Advanced Ed, Connie Harris, the organization looks at five basic standards during the review, followed by other areas that the team will take an even closer look at.

"We have (what we) call 33 indicators," Harris said. "Everything from admission to the school to governance and leadership, curriculum, instruction, resources, data and school improvements."

During the 2013-2014 school year, more than 100 schools went through accreditation reviews.

According to Harris, the school completed a self-assessment report as well as an executive summary report prior to the Advanced Ed team's arrival. After the two-day review an exit report was given to the school and to Grand Canyon School Superintendent Dr. Shonny Bria.

"They gave the preliminary report on their last day of the visit, which is standard protocol for any one of our organizations," she said. "After the team leaves and they finish writing the report and (then) submit the report."

The report was then submitted online to a document reviewer before going to state council members for further review.

On May 28, the Arizona State Council met to review the schools accreditation reviews and to make recommendations for the school to review. The school's final report was sent out through the Advanced Ed. Commission after June 25.

"The commission meets Thursday, the 25th of June, to ratify recommendations and on Friday (June 24) once that's ratified we will be giving official notice out to all of the schools who went through their processes," Harris said. "On Friday we can officially share information. The school's reports are returned to the schools within 30 days, so they will actually have the report."

GCS Superintendent Shonny Bria did not immediately responded to inquiries about the status of GCS and whether or not it passed accreditation or is under review.

However, according to Harris, each school generally receives a few powerful practices, which are areas specific to each school where they are going above and beyond and areas for improvement.

"(These) would help a school, should they choose to look at them and address them, to get stronger, but they are not required to do them," Harris said.

According to Harris, every school has a minimum of at least one improvement priority.

"Some of the schools may fall into the lower quartile," she said. "They may fall into an area where they are under improvement. That's the only rating we have. You are either accredited or you are credited - under review."

Harris stated that should a school ever fall into the under-review category, the school would have an opportunity to improve in the areas recommended and a team from Advanced Ed would visit the school within the year (April or May 2016).

While the loss of accreditation is not common, Harris said it does happen occasionally.

"We have people every year that, for whatever reasons, may not continue with their accreditation or people who apply and don't get accredited because they don't meet the standards," she said.

Charles Tack, deputy public information officer for the Arizona Department of Education, said that while accreditation is important to some school districts, the state of Arizona does not require a school to be accredited.

"The state board, to my knowledge, that's not something they look at. Because, again, it's not a requirement," he said. "So there are other mechanisms the school district may be identified as in need of additional services, if they're struggling academically, but with respect to accreditation that's not likely going to be something that raises an alarm with the board."

Tack said the state bases their standards of testing and evaluation of schools on the AIMS(Arizona Instrument to Measure Standards) tests and letter grades.

"The A through F letter grades are primarily based on standardized testing," he said. "They were based on the AIMS test and if those grades are low enough, over a period of time, that will trigger a school to be placed in an improvement process."