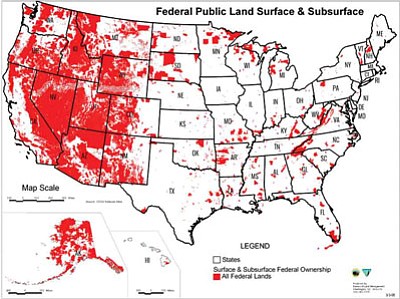 Thorpe believes this is a misuse of the Antiquities Act and a breach of contract between the state and the federal governments and a violation of the law.

"As far as I'm concerned, I think it's a violation of our constitutional rights," Thorpe said. "In 1906, Congress passes an act that gives the president wide discretion to go in and create these monuments, which I believe are in contradiction with our Constitution. Because our Constitution doesn't provide the federal government with those kind of authorities."

Thorpe explained that when Arizona became a state in 1912, lawmakers worked with Congress to enter into an Enabling Act, which allowed Arizona to move from territory to state status. Part of the Enabling Act required proceeds from Arizona's trust land, which are obtained through land leases, grazing permits or selling the land, to be used for education.

"When, for example, President Clinton created four monuments in Arizona, (which is) approximately one-hundred thousand acres of Arizona trust land, which means that that land is now encumbered by the federal government," Thorpe said. "There's no way that we can use it for its intended purposes. As far as I'm concerned, that is a breach of contract between the state of Arizona and the contract - our Enabling Act that made us a state. They've broken that agreement when they do that."

Additionally Thorpe said the 1.7 million acres included in the proposed monument would no longer be state trust land or private land.

"I am very concerned, in the past when new national monuments had been created in Arizona they typically had taken both quite a bit of ranch land but more importantly, from the state perspective, they have taken state trust land," Thorpe said. "Basically, we still own the land but it's incumbent, meaning that we can't do anything with it."

The incumbent land would not be subject to state taxes, which Thorpe said takes away funding for educational purposes.

"That's money that would be going to our schools and infrastructure, which isn't," he said. "Right now the federal government controls about 31 million acres of Arizona - 42 percent. In our state only 16 percent of our land is actually owned by private citizens who pay taxes on that land. The rest of the land doesn't pay taxes."

Craig McMullen, regional supervisor for Region II of the Arizona Game and Fish Department (AGFD) based out of Flagstaff, presented the commission's formal position to board members of the Coconino Natural Resource Conservation District (CNRCD) during a June 25 meeting in Williams.

The commission first voted to oppose the monument through a resolution in 2012, basing their decision on the analysis that addressed concerns voiced about the need for national monument protection.

"The department has done an analysis of the reasons that advocates for this monument have proffered for its need," McMullen said. "I think that our department analysis has shown us that there is really no demonstrated need for additional regulatory work in order to deliver a good sweep of management for game animals, non-game animals, recreation and land management."

According to McMullen, good land management is already in place and the designation of the monument could make management and protection of the area more difficult and would be more of a hindrance than a help.

Groups advocating for the monument believe the monument will protect the area from off-highway vehicles (OHV) use, old growth logging, over-grazing of the land, and preservation of wildlife connectivity among other issues.

"There is already good management occurring on these grounds as a result of fully vetted public processes and federal land management agency plans (that have) the best available science," McMullen said. "Our department's analysis suggests that the biggest thing threatening, if there are threats to connectivity, is overgrowth of the country. The ability to continue treating that land is very important. We don't think that the monument will deliver the type of regulatory over-structure that will make land management easier, in fact our analysis suggest that it would make it more difficult."

According to Game and Fish, grazing is already strictly regulated by several land management agencies.

"Grazing is managed by federal land management agencies and state land and BLM and Forest Service," he said. "Our analysis suggests - we don't believe that a monument is needed in order to protect that land from over-grazing."

In addition to AZGFC, comments, resolutions and formal positions opposing the monument's designation are being sent to state and federal lawmakers.

"To date we are aware that there have been 10 resolutions by different governing boards, including the commission," McMullen said. "The commission's task is pretty specific, the commission's position is opposed to the designation of the monument by presidential proclamation. In its stead, they're calling for a public process, not a presidential proclamation, that would take into account the full depth and breadth of the needs to manage and use the land and keep the land in productivity."

In April, the town of Tusayan officially opposed the creation of the watershed's designation as a national monument and recently passed resolution No. 2015-06 in support of U.S. Senate Bill 1416 that would prevent the president from changing the federal water-rights designation of lands declared to be national monuments.

The resolution states 'The United States Senate, in its current legislative session, will be considering whether to approve U.S. Senate Bill 1416, a bill which would amend the Antiquities Act to prohibit the president from unilaterally creating a federal reserved water right when designating a national monument, and whereas a federal reserved water right for a national monument could have far­ reaching consequences for privately held water rights.'

The bill would restrict the president's power to acquire water rights for the land in a national monument and only allow water acquisition in accordance with state law.

Thorpe is drafting a letter of opposition, which will be sent to federal authorities, including the Department of the Interior, the president and the attorney general.

Additionally, Thorpe believes a constitutional amendment to the Antiquities Act is necessary to justify the breach of contract with the Enabling Act.

"New verbiage, new powers within our constitution that gives them the authority to create monuments," he said. "They've never done that."

The monument's designation is currently under review but designation of the watershed as a national monument currently can occur through an executive order from President Barack Obama or by an act of Congress.