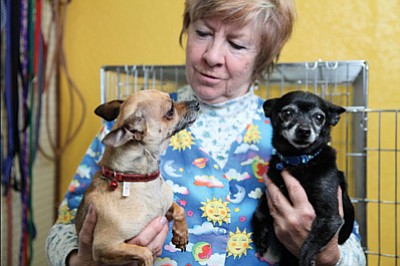 Many Tails Pet Grooming owner Bruni Loprieato plays with Gracie and George. The dogs are in need of new homes after being abandoned a few weeks ago. Ryan Williams/WGCN

WILLIAMS, Ariz. - A few weeks ago, three chihuahuas were abandoned overnight in the First Baptist Church parking lot in Williams. The dogs were left in a metal cage with no blanket and were in need of extensive veterinary care.

Local animal activists say this is just one example of a problem that happens far too often in Williams and other cities - animal neglect. Now those involved are seeking a home for two of the dogs that haven't been adopted yet, as well as donations to help cover the $1,800 the dogs required in veterinary care.

"There was not $1,800 attached to their cage when they were left at night," said SAVE-Meant to Rescue (MTR) founder Robynn Eckel. "So that means the dog group is scrambling once again to pay a bill from another person's neglect."

Williams resident Fred "Perico" Avila discovered the abandoned dogs after hearing them barking during the night. He grabbed his flashlight and followed the sound to the dogs that were left in the 9-degree cold. From there Animal Control took in the dogs until Many Tails Pet Grooming owners Bruni Loprieato and Britta Anderson started fostering them.

The dogs required dental care, spaying and neutering, and shots. One of the dogs also had a tumor that needed to be removed.

Loprieato and Eckel said the chihuahuas were likely used for breeding.

"The previous person made all kinds of money selling these puppies for years and have not put one dime back into these adults' health or well being," Eckel said.

Williams resident Gary Stokes adopted one of the female chihuahuas, named Peanut. Loprieato, Anderson, Stokes and SAVE-MTR have all contributed to the $1,800 veterinary bill. They hope the community will donate toward the veterinary costs of the abandoned animals.

Loprieato said that she wanted to reimburse Stokes for taking on his rescue dog's costly veterinary care.

Loprieato added that she would like the remaining two dogs to be adopted together.

"I don't want to separate them because they're very attached to each other," she said. "When one of them is away from the other one they start crying. They probably have been together all their lives."

"They are very loving, very sweet," she said of the dogs. "They're not really barkers except when people come in. I'm already trying to train them."

The situation with the three abandoned chihuahuas was not an isolated incident. Loprieato and SAVE-MTR members are fostering several other dogs that have also been abandoned.

"It's a problem, people dumping animals or just letting them loose on the street and they expect somebody else to pick them up and take them," Loprieato said. "My heart just breaks for them."

Giving the dogs a home
'An original cowboy'
SAVE-MTR Casino Night goes to the dogs
SAVE-Meant To Rescue gives the gift of puppy love
SAVE-Meant to Rescue plans drawn up, animal shelter in Williams closer to reality
Event Calendar