Back to basics: securing a backcountry permit to hike the Grand Canyon
Park Service issues 14,396 permits in 2014, applications available four months in advance 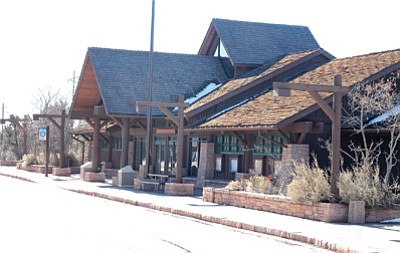 The Backcountry Office on the South Rim of Grand Canyon National Park is one of four locations where hikers can apply for a backcountry permit. Loretta Yerian/WGCN

GRAND CANYON, Ariz. - Deciding to hike the Grand Canyon is a major decision for many people and after making the initial decision, many realize that is the easy part.

Last year the Grand Canyon Backcountry Office issued 14,396 hiking permits. Only one person needs to make a reservation and hold onto the permit throughout the hike for each group. Group sizes vary, from small groups of one to six people or large groups of seven to 11 people. Therefore the 14,396 permits issued in 2014 only reflects the number of people purchasing the permits.

After deciding to hike the Canyon, the next step is to pick a date and apply for a backcountry permit.

Backcountry visitor technician Luke Hutchinson has worked at Grand Canyon's South Rim Backcountry office for three and a half years and said after deciding to hike the Canyon there are several things hikers need to determine.

To start, hikers should determine how far they are hiking and if they are camping overnight.

Only hikers planning on spending the night in the Canyon need to apply for a backcountry permit.

"Permits are required for any overnight camp in the backcountry," Hutchinson said. "You don't need a permit for day hiking."

Organized groups of hikers planning on making a rim to rim hike will need a backcountry permit.

"As of last fall, the park implemented, for organized groups, that if you're doing a rim to rim (hike) or if you're going below a certain point you'll need a permit," Hutchinson said. "We've had a lot of people going rim to rim in a day."

With rim to rim hiking becoming increasingly popular over the years, the park monitors their numbers in order to protect hikers and the ecological impact they have on the Canyon.

"It (rim to rim) has gotten a lot more popular and the park limits the number of people that camp there, in order to protect the area and also they are limited facilities," Hutchinson said.

For those wanting to make the rim to rim hike-a 21 to 23 and a half mile hike, depending on the trail - the season is from May 15 to Oct. 15, the primary date the North Rim opens for the season.

After deciding how long the hike will take, there are several things to consider next.

"People should do some planning in advance but for most it depends on when they want to come," Hutchinson said. "The best hiking here is spring and fall. September through the end of November and March into June are the best times and the most popular."

While hikers venture into the Canyon year round, most prefer not to hike during the summer and winter months due to extreme temperatures.

Therefore, hikers planning to hike during the spring or fall months should plan their trip well in advance, due to its popularity.

In order to manage the number of requests for backcountry permits, the park will open each month's availability four months before that month.

For instance, anyone planning an overnight hike for the month of October can not apply for a permit until June 1 - four months in advance.

Hikers can submit requests for their backcountry permit anytime during those four months, but not before.

Another option many hikers take is to get a last minute permit and/or go on a waitlist.

These permits can only be obtained by walking into the backcountry offices.

"The majority of the reservations are made in advance and then we save a few permits and we issue them the day before," Hutchinson said. "It's not just people who don't know how to get a permit, it's also a lot of people who know they didn't get a permit and this is how they're going to try and get a permit."

The last minute backcountry permits are limited to one or two consecutive nights and are issued no more than one day prior to the hike.

According to park officials, there are only around five days per year when sites are unavailable and hikers could have to wait an additional day.

One factor for hikers to consider in planning their trip is the number of people in their group. For each of the three campgrounds in the Canyon, there are a limited number of small and large group sites.

Currently there are only three ways to apply for a backcountry permit.

Hikers can call to inquire about availability on certain dates and information but permits can only be obtained by faxing the paperwork (located online at http://www.nps.gov/grca/planyourvisit/upload/permit-request.pdf), mailing the paperwork into the backcountry office or submitting the application in person.

Each permit costs $10 per permit for a processing fee. Multiple applications can be submitted and will be treated as separate interactions. Impact fees of $5 per person, per night camped below the rim. Impact fees help cover the cost of trail maintenance and water and waste management.

All fees for backcountry permits are non-refundable. If hikers decide to cancel their hike and cancel within four days of their trip, they receive a hiker credit, valid for one year.

Frequent overnight hikers have the option to purchase a one-year frequent hiker membership for $25. The frequent hiker membership waves only the $10 permit fee. If a hiker's application is denied, no charges are incurred and hikers are free to apply for different dates. The park does not offer discounts on backcountry permits except to those with Native American heritage - their fees are waved.

Hikers can obtain backcountry permits from four locations: the backcountry offices located on the North Rim and the South Rim of the Canyon and the Bureau of Land Management (BLM) office in St. George, Utah and Pipe Spring National Monument office located 15 miles west of Fredonia, Arizona accept in person requests only.

More information about obtaining backcountry permits and hiking information can be found by contacting the backcountry information center by email at grca_bic@nps.gov, by phone at 928-638-7875 or by visiting the park's website at http://go.nps.gov/1lvc55. The backcountry office is open from 8 to 12a.m. and 1 to 5 p.m. Monday through Friday, excluding holidays.