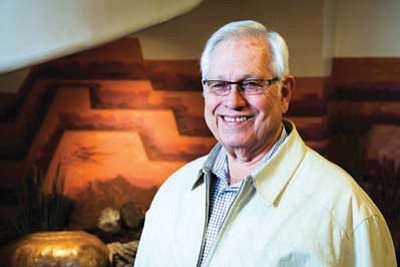 Grand Canyon Papillon Group founder and Chairman of the Board Elling Halvorson was recently honored at a California award ceremony. Ryan Williams/WGCN

The award was presented during the 12th annual Living Legends of Aviation Awards. The event was hosted by John Travolta, the "Official Ambassador of Aviation ®," in a ceremony held at the Beverly Hilton ballroom.

Halvorson received the award in recognition of his more than 50 years of contribution to vertical flight. He was selected based on his vision, persistence, perseverance, dedication and positive impact on vertical flight. Bell Helicopters presented the award to Halvorson.

Halvorson said it was an honor to receive the award.

"Since I was a little boy, my dream has been to fly. If you had told me then that I would be receiving an award like this, I would not have believed it. It's an honor to receive this respected award, especially this year as Papillon Helicopters celebrates its 50th anniversary," Halvorson said.

This year's awards was dedicated to Bob Hoover, the first inductee of the "Living Legend of Aviation." The Legends are celebrating Hoover's 93rd birthday along with special guests attending to honor this famous legend.

Other awards presented at the event included the Aviation Inspiration and Patriotism award to Angelina Jolie, the Lifetime Aviation Entrepreneur award to Herb Kelleher of Southwest Airlines, Aviation Industry Leader of the Year award to Dr. Michimasa Fujino, founder and CEO of Honda Aircraft Company and the Harrison Ford Aviation Legacy award to Mark Baker, president and CEO of the Aircraft Owners and Pilots Association.

Legend Buzz Aldrin's 85th birthday was celebrated at the After Awards Party on the roof of the Beverly Hilton.

The Living Legends of Aviation annual awards are considered the most prestigious and important recognition event in aviation. More information is available from www.livinglegendsofaviation.org