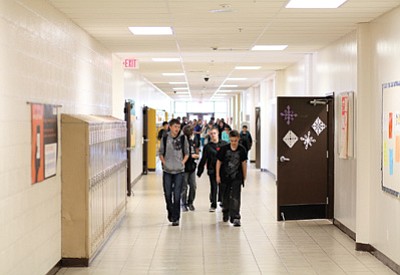 WILLIAMS, Ariz. - Middle school students are learning accountability this school year with the implementation of a new point system that determines if they'll move on to the next grade.

With the first semester of school finished, Principal Bryan Lords said he's seen a dramatic shift in the students' attitude now that they are working to earn points.

"In high school you have the credit system. They have to earn credits to advance to the next grade," he said. "In middle school there really is no reason for kids to want to do school work, and as they get into the preteen years and the teen years they start pushing back against what people are telling them to do."

To address this issue, teachers and administrators helped develop the middle school point system. The Williams Unified School District unanimously approved the point system last year at its Feb. 26 meeting. The point system focuses on four areas: academics, attendance, tardies and behavior. Students need six points out of 10 to continue to the next grade level.

During the last school year, about 23 students out of the 67 students in the eighth grade class alone would have been retained if the point system had been in place.

So far this year, out of the 130 sixth, seventh and eighth graders, Lords only has about 11 student at risk of retention.

"Last year the culture was it's cool to be not doing anything, it's cool to have Fs, it's cool to fail, whereas this year it's not accepted," Lords said. "The kids want to try to do more and want to be better and want to have better grades and I think the teachers are on board with getting them to do that."

Parents now receive a points score sheet along with their child's first semester report card to see where they stand. If the child is at risk of retention, parents also receive a note explaining which areas need improvement.

Besides improvements on the academic side, behavior issues are also down so far this year. Last year, Lords said about 30-40 students were suspended. During the first semester of this year, only nine students have been suspended.

Although tardies are still high during first hour and after lunch, they've also gone down compared to last year. Lords credits this change to the Capturing Kids Hearts training staff participated in last year, which encourages teachers to stand outside their doors and greet students as they come to class.

"I think it helps with the atmosphere, and once the kids want to go to the classes they feel like the teacher cares about them and they're not trying to be late because they hate math or they hate English," he said. "They actually want to go because the teacher is making it inviting for them."

Other possible reasons for improvement at the middle school level is veteran teachers mentoring newer teachers and a Falcon bucks rewards program. With all of these factors combined, Lords said the kids are starting to understand their responsibilities as students.

"I think just the attitude of the kids has changed and I think that's the key thing for why we're not having near the problems we had before," he said.