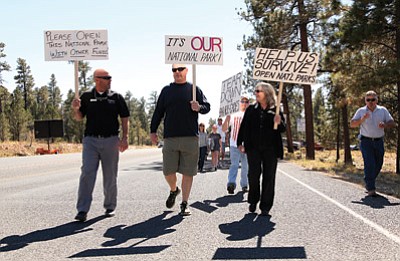 WASHINGTON - U.S. lawmakers reintroduced two bills Jan. 13 to help states recoup money they spent to keep national parks open during the 2013 government shutdown and allow local communities the option to help pay to keep parks open in the event of a future shutdown.

Flake, Alexander and McCain first introduced the National Park Access Act during the 113th Congress. The bill was unanimously approved by the Senate Energy and Natural Resources Committee, but was not brought up for a vote on the Senate floor.

"For well over a year, Arizona and the five other states that stepped up to ensure public access to national parks during the government shutdown have been waiting on the Senate to act on the bill," Flake said. "Along with my fellow sponsors, I remain committed to quickly advancing the National Park Access Act to the Senate floor for a long overdue vote."

During the government shutdown in October 2013, six states - Arizona, Colorado, New York, South Dakota, Tennessee and Utah -advanced about $2 million to the National Park Service to temporarily re-open national parks, including Grand Canyon, Mt. Rushmore and the Statue of Liberty. After the shutdown, Congress retroactively funded the Park Service, which has since retained the $2 million state contribution as a shutdown windfall.

On Feb. 3, 2014, Flake, Lee and Alexander sent a letter to Department of Interior Assistant Secretary for Policy, Management and Budget, Rhea Suh asking if she would support legislation to reimburse states that provided money to temporarily reopen national parks during the shutdown.

On Feb. 4, 2014, Flake secured Suh's commitment to support legislation for reimbursement during a hearing of the Senate Energy and Natural Resources Committee.

On Feb. 7, 2014, Suh provided the Senate Energy and Natural Resources Committee with a written statement of support for state reimbursement legislation.

The Department of the Interior released a report March 3, 2014 that said Arizona had the second-highest losses in the nation because of the shutdown, trailing only California, which lost $31 million.

Arizona saw a $27 million drop in spending at its national parks during the partial federal government shutdown, with $17 million in losses at Grand Canyon National Park alone, according to the report.

The shutdown left many local Grand Canyon businesses scrambling to cut their losses.

Tusayan was hit hard. The town had generated more than $290,000 in October sales tax the year before and depends on tourism dollars to stay afloat.

The uproar led Tusayan business owners and citizens to not only stage a protest, but also raise more than $200,000 to partially reopen the park. Along with private contributions, the town allocated $200,000 from its emergency funds. However, the Park Service said it was against federal law to accept third-party donations even though it was allowed during the last government shutdown in 1995.

Flake and McCain, along with Utah's Orrin Hatch and Mike Lee, reintroduced a bill that would require the Interior and Agriculture departments to accept offers from local governments to fund the continued operation of public lands in case of a government shutdown.

Gateway communities near national parks, including Grand Canyon, Arches, Canyonlands and Rocky Mountain, suffered significant harm until Interior Secretary Sally Jewell decided to accept offers from governors to pay for the parks to be reopened.

The bill would make acceptance of future offers from states or local governments mandatory.

"Public access to public lands benefits more than individual campers, recreational hunters, outdoors enthusiasts and memorial-visiting veterans; it is the economic lifeblood of many tourism-reliant communities across the nation," Flake said in a statement. "If public or private funds are offered to help keep national parks and other public lands open in the event of a government shutdown, the federal government ought to accept them, and quickly."

Last November, a previous version of the bill passed the Senate Energy and Natural Resources Committee on a 12-10 vote, with all but two Democrats opposing it. It did not receive a Senate vote.