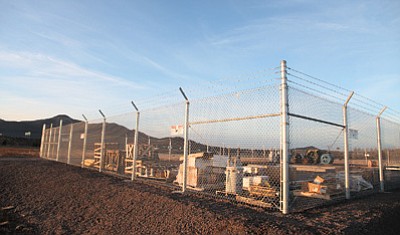 Williams' second electric substation located at Airport Road and Ellen Way is expected to be up and running in late February. Ryan Williams/WGCN

APS has agreed to pay for the upfront cost of constructing the new Kaibab Substation and the city will pay the company back interest free over four years.

However, the city is getting some help paying the money back from one of the businesses that will use a considerable portion of the electricity - Love's Travel Stop.

"Like any project, we think these projects need to pay their fair share of these costs," City Manager Brandon Buchanan said. "This project generated a certain amount of new demand on the system. I don't think it's right to ask existing customers to pay for that."

With that portion taken care of, the draft finance agreement calls for the city to repay APS $453,000 the first year, $300,000 the second and third year and $400,000 in the fourth year. The Williams City Council discussed the tentative agreement at its Jan. 8 meeting.

Money from the electric fund, increased electric revenues from new growth and possible savings from the Operations and Maintenance contract with APS will contribute to the payments for the substation, according to Buchanan's staff report.

Vice Mayor Don Dent expressed concern over one portion of the draft finance agreement. In the agreement, APS asks to modify the requirement for the company to maintain a customer service office and to locate a line crew and maintain a facilities warehouse within the city.

"Now in reality we pay them to operate the office so it might be in our best interest to tell them go ahead and move your office out of here and it will save us a chunk of money a year," he said.

The city pays APS $135,000 a year to keep their office in town. While Dent said the intent was originally to keep the office jobs local, he wasn't sure if local people filled those positions today.

In terms of the crew, Dent said the Arizona Corporation Commission had originally required APS to station a crew in Williams that could also serve the Grand Canyon and Seligman areas. However, he said he wasn't sure if that requirement had changed.

"I'm not so sure I'm real happy about the idea they want to move that crew out of here, because then a temporary outage that now can be handled in 30-40 minutes turns into a three-hour detail," he said.

Buchanan said he and the city's attorneys are working on changing the language in the draft agreement from agreeing to agree to the terms to agreeing to negotiate them.

"We can't agree to agree to something before we negotiate it," he said. "We agree to discuss these and consider these changes that they would like to make, but we can't legally agree to anything before we undertake those negotiations."

Mayor John Moore said the matter of the crew and the office didn't have anything to do with the substation, and Dent agreed.

"Don't hold us up over the substation by throwing this language in it," Dent said. "It's like sticking a little gun to the side of our head is what it is. It's not a proper way to negotiate as far as I'm concerned."

The council instructed staff to continue with the negotiations in the draft agreement. Buchanan expects the final agreement to come before the council at their next meeting.

The Williams City Council approved plans to build the Kaibab Substation at the northeast corner of a parcel of land at Airport Road and Ellen Way at its Sept. 11 meeting. The current electric system is outdated, and the city has had to complete several conversion projects in the last few years to help deal with the issue. In addition, the system is near capacity.

Recent developments have heightened the necessity for a new substation. The city's current water crisis resulted in the reactivation of the Rodeo Well, which used up the capacity originally planned for the future Love's Travel Stop. In addition, the city is planning on drilling a new well in that area, which would require additional power.

The new substation will eventually serve the wastewater treatment plant and the Grand Canyon Railway shop. This will relieve some of the existing burden on the current substation located on Oak Street between Sixth and Seventh Streets.

In addition, the new substation will serve several future projects that will require large amounts of power, including the Love's Travel Stop, a new hotel planned near the intersection of north Seventh Street and west Franklin Avenue and the Newpac Fibre sawmill on Garland Prairie Road.

Work on the substation itself is mostly finished, but now some connection work is needed. A feeder line is being built from the substation to the city's distribution system on Grand Canyon Boulevard, which should take about three weeks. Buchanan estimates the Kaibab Substation will be serving the city by late February.

Love's Travel Stop will likely not open until the substation is complete.

"Unfortunately that's delayed them a bit, but I think it's the right call to make sure they open and stay open without having to be interrupted to make a conversion later on," Buchanan said.

In other council news, members approved a bid package to solicit a contractor for the city's new well. Because of the city's critical water situation, the bid process has been shortened. City staff already notified four to five potential drillers that they would be soliciting bids, and those interested will have two weeks to submit one.

With the bid process likely wrapping up by the end of January, drilling could start in February and the well could be finished by April, according to Buchanan's staff report.

Council members took the opportunity to name the new well before starting the bid process. After several suggestions including Desperation Well, Last Chance Well and Salvation Well, council members settled on Sweetwater Well. The name comes from the nearby Sweetwood Dam.

Williams City Council members approved the new site at their Dec. 11 meeting. The well will be located on a 16-acre piece of city-owned property north of Interstate 40 on Airport Road. It will be situated on the same parcel of land where the substation is being built.

Developing the new well is expected to cost about $845,000, including drilling, engineering, utilities to the new well site and a new water line. The city already has the column pipe and pump for the well, which cost about $485,000.