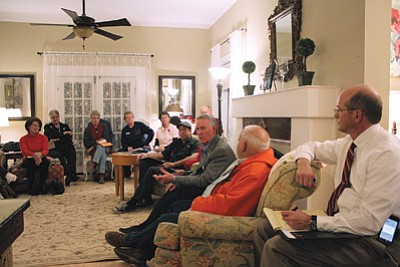 Active volunteer Rodger Ely addresses representatives from different service organizations and businesses at Williams’ first event huddle Jan. 8. The purpose of the event was for people to work together to improve the city’s events. Marissa Freireich/WGCN

WILLIAMS, Ariz. - In a football game, players gather together in a huddle to plan their next play. In Williams last week, community members joined together for a different kind of huddle to plan out the coming year's events.

About 25 people attended the first event huddle to discuss how they could work together to improve events offerings in Williams.

Representatives from the Greater Williams Community Fund, the Lions Club, Kiwanis, the American Legion, the Veterans of Foreign Wars, Habitat for Humanity and other organizations all attended to discuss what they had planned for the year.

Kerry-Lynn Moede organized the event huddle and hosted it at the Yellow House. Although she is the events oversight committee chairperson for the Williams-Grand Canyon Chamber of Commerce's Board of Directors, she put on the event independently. Moede said she'd like to have an event huddle at the start of each year so everyone can be on the same page events-wise.

With the Forest Service's lease at the Visitor Center expiring on Dec. 31, the city of Williams independently assumed operations of the Visitor Center starting Jan. 1. To help pay for the center's operation, the Chamber of Commerce's events coordinator position was eliminated.

Moede came up with the idea for the event huddle after hearing different people talk about events that others did not know about or that other people might be able to help with.

She said rather than different groups competing to put on various events independently, they should work together.

Moede outlined some of the changes the Chamber of Commerce is making this year to make its events more appealing.

"We're coming up with new ideas we're trying to better the ones we're already doing," she said.

For example, the Northern Arizona Barbecue Festival will become a part of a larger event called Williams Wild West Weekend in June. The event will also include more food vendors, chuck wagon cooks describing their history and country music performers. The weekend will also feature the Cowpunchers Reunion Rodeo.

"We all felt that alpine kind of suggests that it's somewhere else," Moede said. "We all kind of scratched our head and thought why do we call it that."

Besides the popular scarecrow contest, the event will feature a jack-o-lantern carving festival inspired by the cooking show "Chopped."

Chamber board chair Jerry Anthony said new ideas are critical to the survival of the town.

"Hopefully we can bring some new insight, some new blood, some new hope for growing this town," he said. "I've always firmly believed if we don't grow as a community, company, whatever the case may be, we ultimately will get stagnant and die. So I hope I can bring some new vitality to the chamber."

After Moede and Anthony spoke, representatives from different civic groups and businesses took turns outlining their event plans for the year.

"She is a dynamo," he said. "I'm happy to see her involved. What she's doing here is huge. I would not have expected to see this many people as fast as she's brought people in to get involved in what we're trying to do to help the community, the businesses and the city grow."

Moede emphasized that while the chamber will continue to put on events, the organization's job is mostly to bring people to town. That's why it is important for the different civic groups in town to put their heads together.

More information about upcoming events is available from the Chamber at (928) 635-1418 or www.experiencewilliams.com/events.