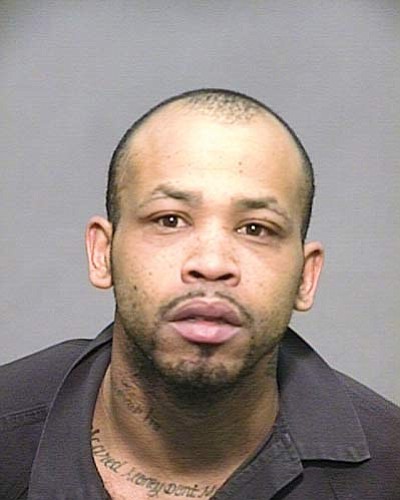 Daren Marshall is being held on prohibited possessor of weapons, possession of marijuana, possession of dangerous drugs and possession of drug paraphernalia charges. He is the main suspect in the armed robbery. Photo/Coconino County Jail

WILLIAMS, Ariz. - A masked suspect robbed a local hotel at gunpoint last week, leaving with a small amount of cash but without injuring anyone.

The Williams Police Department responded to the armed robbery on Dec. 30 at 2:30 a.m. at the Motel 6 at 831 W. Route 66. According to Police Chief Herman Nixon, the suspect entered the hotel, pointed a semiautomatic handgun at the clerk and demanded money. The clerk complied and the suspect left with a small amount of cash.

Officers developed a person of interest and served a search warrant at 125 W. Grant Ave. shortly after the armed robbery. Twenty-six-year-old Williams resident Daren Marshall, who is a prohibited possessor of weapons, was taken into custody after several weapons were found in the residence. Officers also recovered a large amount of marijuana and drug paraphernalia along with a small amount of methamphetamine.

Marshall was booked into the Coconino County Jail for prohibited possessor of weapons, possession of marijuana, possession of dangerous drugs and possession of drug paraphernalia charges. The armed robbery is still under investigation.

"(Marshall) is our main suspect, it's just we have a lot of loose ends to tie up to connect him to this," Nixon said. "I'm hoping to have that done this week and have him formally charged with the armed robbery."

In the nine years Nixon has served as the police chief in Williams, he can only remember one other armed robbery taking place.

"In a small town we don't have those major crimes like the big cities," he said. "The problem is crime is getting worse and we have that I-40 corridor. People got to understand that criminals have vehicles, criminals have transportation, so you've always got to keep your guard up."

Nixon added that it was unusual to see an armed robbery during this time of the year when fewer tourists are in town spending money and businesses likely have less cash on hand.

Although armed robberies are rare in Williams, Nixon said the best way for businesses to be prepared is to install surveillance systems.

"We were lucky with this one that Motel 6 has a surveillance system," he said. "Even though this individual was completely masked up - he had a mask on, long sleeves, you couldn't see anything on this individual - but it still helps us with just their mannerisms, the way they walk, their weight, their height. To have something that can help us locate suspects is always helpful."

Business owners should periodically check to make sure their camera systems are working and that the picture quality is good, according to Nixon.

He emphasized that the clerk did the right thing by giving the suspect money.

"Nothing's worth your life," Nixon said. "If they want your money and they have a weapon, give it to them. That's why you have insurance. It's not worth dying over a couple hundred dollars, so cooperate with them and give it to them."