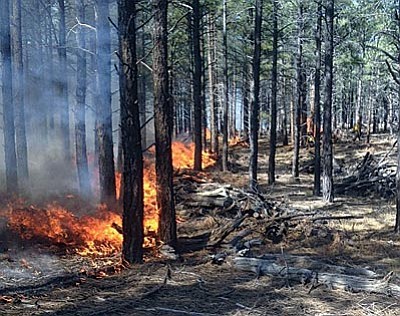 4FRI will help restore the forest to a healthier state, which will include prescribed burns. Submitted Photo

TUSAYAN, Ariz. - On Nov. 19 a new draft record of decisions for the Four Forest Restoration Initiative (4FRI) was published to update the public on changes to the initiative. After careful review 4FRI is considering a final draft in early 2015.

4FRI is the largest collaborative landscape initiative in the country and is the forest service's plans to restore ponderosa pine throughout northern Arizona. The initiative will treat approximately 2.4 million acres of ponderosa and covers four national forests; the Kaibab, Coconino, Tonto and Apache-Sitgreaves. Plans for the initiative started in November of 2011 and is broken down into phases.

It is projected to take 10 to 15 years to complete.

Phase one includes parts of both the Kaibab and Coconino national forests.

After recent revisions were made to the draft, the forest service opened the draft for an objection period.

"Any individual or group that previously submitted comments on 4FRI can submit objections," said Annette Fredette, team leader of 4FRI. "It's not a comment period but people can file their objections for review."

Before the newest draft was released, the forest service received 213 comment letters and over 2,000 individual comments. The main concerns included smoke from prescribed fire, retention of old and large trees, post treatment canopy cover and openness, scope and scale of treatments, T & E habitat and the range of alternatives and comparisons.

Dick Fleishman, assistant team leader for 4FRI, said 'full restoration' refers to structure, pattern and distribution of the forests. Not necessarily historical restoration of what it was 200 years ago. Additionally, Fleishman said phase one of 4FRI is only one component of the plan and that the initiative is aimed at ponderosas pines. Trees like the pinon and juniper will make up less than one percent of the treatment plan.

"Phase one is a ten year stewardship contract covering 300,000 acres," Fleishman said. "We are hoping to get that up and running even more aggressively this year."

4FRI has three projects planned for areas surrounding Tusayan. The town will not begin to see the local impact until 2016-2017.

More information about the 4FRI initiative can be found at www.ff.usda.gov/4fri