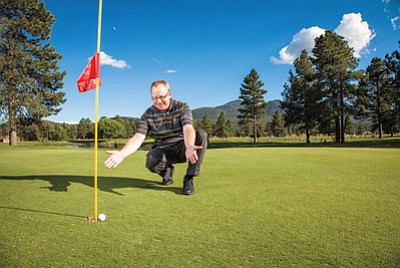 Elephant Rocks Golf Course Manager Scott Little tries to coax a ball into a hole at the course. Little started managing the course at the start of the 2013 season, and last year the course had its most successful year on record. Ryan Williams/WGCN

WILLIAMS, Ariz. - With a new general manager overseeing Elephant Rocks Golf Course for the past two years, the course saw its best year for total revenue on record in 2014.

Scott Little started managing Elephant Rocks before the start of the 2013 season. The Williams City Council voted to terminate former golf course manager Brent Redman's contract at its Dec. 13, 2012 meeting because he failed to maximize golfer turnout and revenue through food, beverage and event offerings. The city hired Little to address these issues.

The successful 2014 golf season began when Elephant Rocks was able to open on March 3 this year because of the mild winter, which was the earliest start date on record. Little attributes the increased revenue this season to an increase in the number of rounds played in 2014. This year saw 19,379 rounds, compared to 16,933 rounds last year, which was the second highest number of rounds played on record.

"Of course if you get the rounds, the revenues go with it," Little said. "So seeing those rounds numbers jump up is a very good sign for Elephant Rocks."

Another reason for the increase in revenue was the city's competitive pricing at the golf course, which has helped drive people to Elephant Rocks.

"I think the city does a great job at keeping the price affordable for all golfers, especially local golfers," Little said. "But we had some price increases in our competition in Flagstaff this year that really led to some extra rounds coming our way from Flagstaff. So your competitiveness in pricing led to a huge jump in rounds this year."

The revenue for season passes was also up significantly this year - $48,668.53 compared to $31,175.63 last year. Little said golf course staff promoted the benefits of the season pass more this year. Some people from Flagstaff and Prescott even purchased season passes at Elephant Rocks.

"People feel comfortable, they feel at home, they make Elephant Rocks their home," he said of the season passes.

What Little called "phenomenal" course conditions also made people want to come back.

In terms of revenue per round, the dollar amount decreased slightly this year to $31.90 from $32.37 last year. Little attributes this to more people taking advantage of reduced twilight golf rates.

"We've been promoting and really catering to anybody who wants to play later in the day at basically a twilight rate or discounted rate," Little said. " A lot of our rounds come in the evenings. It's been a very successful push to fill the golf course. It's probably why you see a little bit of a lower revenue per round, but as far as the overall picture, I'd gladly live with that to get that extra 3,000 rounds a year."

Aside from the golfing, Elephant Rocks also had a successful year for events. This year six weddings took place at the golf course, compared to one last year.

The old golf cart building at the golf course underwent renovations last winter to become a banquet hall. What was once a building with cement walls, small windows and an unfinished floor and ceiling now boasts a finished ceiling and walls, an enclosed kitchen, new glass doors, carpeting and a patio. The banquet hall brought in $5,157.24 this year. With one wedding already booked for 2015 and a few more in the works, Little can see hosting as many as 10 weddings at the golf course next year.

"It's one of most beautiful wedding venues in northern Arizona I would say with Bill Williams Mountain in the background and blue skies and some clouds going across there, it's perfect," he said.

With the figures from 2014 moving in the right direction, Little hopes 2015 will be a successful year as well.

"I remember last year when I came in everybody told me (Elephant Rocks) was the best kept secret in Arizona, and I think I'm still working on that," he said. "We're making it a little less of a secret in Arizona."