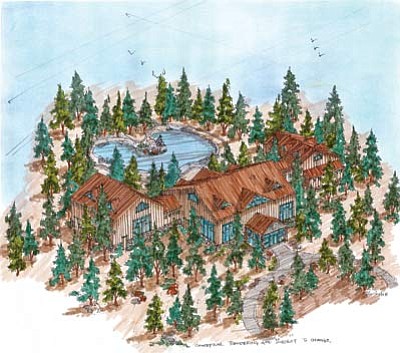 Above and below: Artist’s rendering of what the new development at Bearizona will look like. Submitted photos

WILLIAMS, Ariz. - Since opening in 2010, Bearizona Drive-Thru Wildlife Park has continuously improved on and added to its exhibits. But now the park is ready to undergo its biggest expansion since opening - a three building complex surrounding a lake that will feature retail, restaurant, and office space as well as additional animals.

The expansion is expected to cost between $3 million and $4 million. It will consist of a 10,000 square foot gift shop and two smaller 5,000 square foot buildings housing a restaurant/bar and office space and storage. The buildings will have mezzanines inside, which will add 10,000 additional square feet of loft space.

Preliminary dirt work for the project started in August. The new development will be located behind the existing gift shop trailer. Although the city of Williams is currently under building permit restrictions because of the level four water crisis, the Bearizona development is allowed to proceed because it falls under one of the three exceptions: the construction will not have any new fixture units connected to the city's potable water supply.

The gift shop will not require any water. As for the restaurant portion, Bearizona CEO Sean Casey said he is exploring two options: hauling water exclusively from Bellemont to serve its needs or finding an alternative water source. Bearizona officials are currently in the preliminary stages of drilling their own well.

"We are drilling a well," he said. "I just want to make sure we are successful before I go into any more details."

Casey said building a dedicated gift shop was his number one priority with the park's expansion.

"The trailer does great but it's small and it gets so packed in there with people they just turn around and don't go in," he said.

The existing gift shop space is about 500 square feet. With the added square footage in the new facility, Casey expects gift shop revenue to triple.

The gift shop will feature an indoor/outdoor otter exhibit. A floor to ceiling aquarium inside the store will connect two outdoor ponds. The otters will be able to swim back and forth between the two ponds through the aquarium, along with fish that will be in a separate tunnel. Casey hopes the new gift shop will be open in early May.

The restaurant portion of the development will likely open later in the summer. The Kennelly family, who owns Doc Holliday's Steakhouse and Saloon, Station 66 Italian Bistro, Pancho McGillicuddy's and the Grand Canyon Winery in Williams, will run Bearizona's restaurant.

"It's going to be fast casual," Casey said. "You go up, you order, you get a number, and then you sit down and we deliver it."

Off of the restaurant, two jaguars will take up residence. The baby bear exhibit will also be relocated to an area near the lake.

"This whole area is kind of designed for the whole family to hang out longer," Casey said of the expansion. "It will be a comfortable place for dad to hang out and the kids can look at cubs and the mom can go buy some stuff."

With all of the additional indoor space, plus several covered outdoor areas, Casey said the complex will be ideal for hosting events.

"We've had events in the past where a little rain starts and the whole place clears out, so it's just a safer way to plan things," he said. "We'd like to start doing some Christmas time light events for all the Polar Express people to come back at night. We just haven't tried that because it's so cold and they're usually little kids and there's nowhere to get warm. So I'm getting excited about expanding that a little bit."

At the rear of the complex, a large courtyard will be suitable for events with 800-1,000 people. In late summer or fall Casey hopes to transform the front of the complex into an area with a town square-type feel. That area will be able to accommodate 3,000 plus people.

Although this latest expansion is a major undertaking, Casey has some big ideas for the future. His ultimate goal is to build a convention-style hotel in about five years.

"We'd bring in bigger conventions but we wouldn't have enough rooms for them so we'd hope they'd overflow into town," he said. "It's a way to draw people to Williams."

Casey envisions building the hotel on the edge of the bear exhibit, so some of the rooms would overlook the animals playing in an enclosure with a pond.

"I've always pictured, how cool is it for like family out of Phoenix to get out of the heat and sit on the balcony and watch bears morning, noon and night?" he said.

However, concrete plans for the hotel have not materialized yet.

"I've been saying it for five years," Casey said with a laugh.