Watchtower at Desert View not just another gift shop 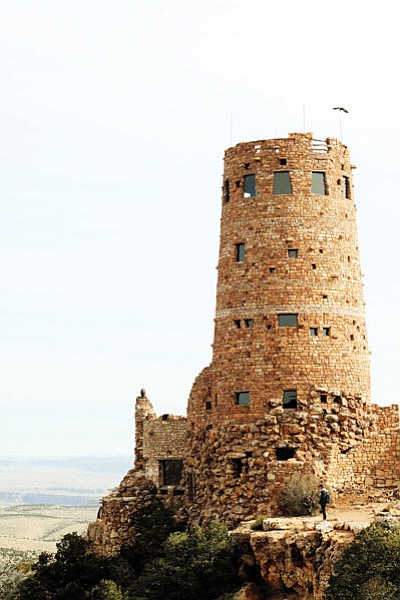 GRAND CANYON, Ariz. - Many changes are in the works for Grand Canyon's Watchtower at Desert View.

As of Jan. 1 the Watchtower was designated a National Park building after it was purchased from Xanterra - a concessionaire company operating lodges and restaurants at the park, by Grand Canyon National Park.

"It was transferred to the National Park Service in January of this year," said Interpretive Ranger at Desert View, Maci MacPherson.

Now that the park owns the tower, it has been able to move forward in restoring the tower to some of its original qualities that its famed designer, Mary Colter, planned during its construction in the 1930s.

"The transition between contracts, in terms of us purchasing back the Watchtower, allowed us to do something that is kind of unusual of an opportunity," said historical architect at Grand Canyon National Park Elizabeth Pidgeon. "That was to return the Watchtower to its original, intended purpose."

According to Pidgeon, the Watchtower was always intended for visitors and has had some form of gift sales inside the tower. However, the gift shop was a minimal part of the appeal of the tower - and was not meant to be its focus. While the park has partnered with Grand Canyon Association to provide a small gift store to the back portion of the tower, the park did not want it to take too much space.

Prior to the park's purchase the Kiva room, the first room of the tower visitors enter, was used as a large gift shop area.

The removal of the large gift shop created a large amount of additional space and partially restored the Kiva room to Colter's design plans.

"When you walk in that space now you're experiencing what Mary Colter intended you to have the experience be," Pidgeon said. "In terms of being a space where you encounter the view through the windows and stop and rest and sort of contemplate that view, that's an experience. Basically we are trying to restore an experience."

Restoring the tower's original art and murals and inviting local Native American tribes to share their traditions and skills is another project the park has planned.

"Originally the Watchtower was designed with the intent for there to be weavers and basket makers and so forth - demonstrating their skills and their art in that downstair space," Pidgeon said. "Of course, over time those demonstrations disappeared."

According to Pidgeon the park plans to have Desert View and the Watchtower area have more Native American presence where they can share tribal traditions, dances, songs, skills, art and oral histories.

Additionally the park is considering turning the old park visitor center at Desert View into a cultural center for Native American tribes to use.

"In the future it might be a place where you will find more tribal presence and visitors can actually come and learn from the people," MacPherson said. "It will be a really neat, new change that will hopefully have people being able to share with people - their actual story."

This year MacPherson said several tribes have already agreed to present cultural demonstrations at the Watchtower.

In addition to the cultural demonstrations planned for the tower, the park plans to work with the tribes and experts to restore murals that were damaged by water.

The project will be funded through a grant from American Express that was pursued by Grand Canyon Association.

The grant will help cover the cost of conserving the murals in the tower - a process that could take up to two years.

According to Pidgeon, the park intends to restore the murals while remaining true to Colter's designs and tribal privacy.

"We are trying to remain very respectful to them," Pidgeon said.

Over the next year the park plans to have a specialist and an intern-training program analyze the murals and help with restorations.

"We are hoping for educational benefit out of this project, not just getting the project done," Pidgeon said.

"There's still more work to do, minor repairs and things, but I think people didn't quite imagine what a difference it would be (the removal of the Xanterra gift shop from the Kiva room)," Pidgeon said. "The rangers have been amazed at the difference it has made and the difference between how people used to come in and move through the space and how visitors come in now and just pause and take it all in and immediately go over to the windows. Its kind of fun that we have recaptured that experience."

Other restorations to the Watchtower include replacement of a handrail and lighting fixtures and electrical rewiring in the tower.