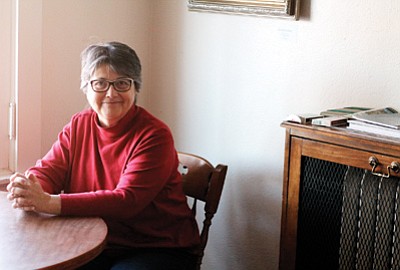 Kathleen Brennan of Taos, New Mexico is focusing on documentary films and still photography during her residency. LorettaYerian/WGCN

GRAND CANYON, Ariz. - Filmmaker and photographer, Kathleen Brennan of Taos, New Mexico has a knack for visiting the Grand Canyon when major events are inmotion.

Brennan's first residency at the Canyon was trumped by the government shutdown in 2013 and now Brennan is the final Artist in Resident on the South Rim after it was announced the program would be temporarily suspended by the park.

In October of 2013 Brennan was packed and ready to spend several weeks photographing and filming the South Rim. She did not anticipate the government shutdown or the closure of 401 national parks, including the Grand Canyon

"I was all packed and ready to go," Brennan said. "(I was) going back and forth with Rene (Westbrook, former program coordinator for the South Rim artist in resident program). 'It might happen, it might not,' and suddenly it was like, 'no, you can't come.'"

Because Brennan's residency was cut short by the shutdown, (she spent 10 days at the Canyon) causing her to miss over half of her time as artist in residence as well as the public engagement planned. Westbrook was able to offer her the choice of when she wanted to return to complete the residency and dismissed her obligation for public services. Brennan chose this February and also decided to give back to the public by speaking to students at the Grand Canyon School.

Prior to Brennan's first residency she had never been to the Canyon and said the 10 days she was at the rim in 2013 helped prepare her for her return and gave her time to develop projects she hoped to complete during her time at the Canyon.

Brennan chose to return during the month of February in the hopes of having snow and winter weather to help inspire her artistic abilities.

"I wanted to come in February because I thought there would be a lot of snow, but there's no snow," Brennan said. "Visually, it's a lot more interesting when you have clouds and snow. It's been wonderful but I'm not getting some of the imagery I thought I would."

In spite of blue skies and lots of sunshine, Brennan has been able to obtain different kinds of inspiration for her work.

"One of the things I wanted to concentrate on while I was here was the night sky and the early morning," she said. "We got to be here for the full moon last week and I got some good images and I got the full moon set the next morning out at Hopi Point."

In addition to the night skies, Brennan is focusing on effects of natural elements on western landscapes, including areas around the Canyon. One of several projects she has undertaken during her residency is an educational project combining her talents as both documentary filmmaker and photographer.

"Last fall I was invited to be a part of this program called 'Fires of Change,'" Brennan said. "They said, 'We are putting together this exhibition where we are combing the arts and the science.'"

'Fires of Change' is an educational project undertaken by artists and scientists hoping to show the effects and importance of fire on the landscape. The project features the work of 11 artists and will be displayed this September in Flagstaff.

Brennan said the project was good timing for her, since she has spent the last several years filming a documentary on droughts in northeastern New Mexico and the effects that has on the landscape. Brennan was invited to display her work based on her efforts to document the effects of fire, water and climate change.

"They're trying to change that perception (fire as an undesirable effect on forests)," she said. "They're trying to educate the public about how fires are really important and with the changing climate, fire is going to be more prevalent in our environment and that we really do need it because the forests are pretty full."

Recently Brennan has been able to photograph areas around the South Rim that have been affected by fire.

"The other day we went out and photographed Pike Creek on Pike Creek Trail where a prescribed burn, 10 years ago, got out of hand and burned right up to the rim," she said.

Brennan will incorporate these photographs into her presentation for 'Fires of Change' and will also use information she gathered to tie into her documentary about droughts in New Mexico.

"It ties into my project in New Mexico, this film I'm doing that is concentrating on the northeast corner of the state where a lot of ranching is going on," she said. "They've been ranching out there for a hundred years and they've been selling off their herds because of the drought and there's no grass. It's a lifestyle and tradition that is starting to disappear."

In addition to 'Fires of Change' Brennan is working on another documentary film called 'Agnes Martin: Before the Grid, Part I.' The film focuses on world-renowned artist Agnes Martin, who died in 2004. It will show a retrospective of her work and will be featured this summer at the Tate Modern in London.

More information about Brennan's time as artist in resident and her portfolio can be found at Brennan's website at www.brennanstudio.com.