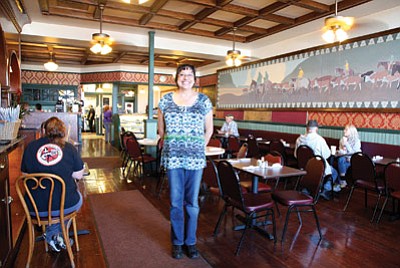 Grand Canyon Coffee and Café owner Anna Dick stands in the dining room at the restaurant’s new location in the Red Garter Bed and Bakery in downtown Williams. Ryan Williams/WGCN

The restaurant moved from its old location at 125 W. Route 66 into a new space at 137 W. Railroad Ave. The space used to house the bakery portion of the Red Garter Bed and Bakery.

Red Garter owner John Holst approached Grand Canyon Coffee and Café owner Anna Dick about moving into the building, which dates back to 1897.

"We didn't have to do anything to update it," Dick said. "John takes really good care of his place."

Besides waxing the floors, Dick added some booths, a waitress station, and some new kitchen equipment before moving in. The move took five days and the restaurant reopened on Feb. 1.

"I was so proud of my cooks because Sunday we were slammed, and they were on it," Dick said. "That was our first day here."

Dick said she likes the new building because of the visibility and the parking availability. It also has more space than her last location.

"This is a little bit bigger, but it's more open," she said. "Once spring gets here we'll do some stuff on the patio, so then that will open up more. In the summer we have more tourists so we need more room."

Dick chose not to change much in the new building because she said it has a nice feel to it.

"You come in and it just feels like home," she said. "That's why I did the booths like that because I wanted to keep the same feel. I didn't want it to lose the homey feeling."

Grand Canyon Coffee and Café serves Mexican, American and Asian food. The baker from the Red Garter is still onboard, so the restaurant also serves a variety of baked goods. More information is available at (928) 635-4907.