Northern Arizona astronomy: spectroscopy and the importance of color in astronomy 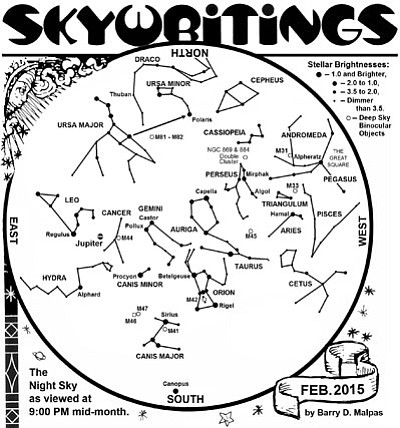 Once the telescope was applied to observing celestial objects in the early 1600s, the science of Astronomy was drastically altered. Larger and more accurate telescopes have been constructed over the past four centuries. However, for most of that time detailed understanding of observations were greatly confined to our own solar system.

In 1666 Sir Isaac Newton noted that when light passes through a glass prism, it was broken into a series of colors we call the spectrum, much as a rainbow forms after a storm. In the early 1800s the British chemist William Wolaston, and German optician Joseph von Fraunhofer, independently noticed that when sunlight was passed through a narrow slit, and then through a prism, the solar spectrum appeared crossed with dark lines, and thus the spectroscope, an instrument for the analysis of light, was developed.

By 1859 the German physicist Gustav Kirchoff described the general nature of spectra noting that luminous low pressure gases observed in the laboratory could produce the same lines that appeared in the sun. What was also discovered, and most important about spectra, was that the lines produced by each element were indicative of each incandescent gas. Hydrogen produced one set of lines, Helium a different set, Lithium another, and so on ... each element having its own unique fingerprint.

By the late 19th century, scientists like Henry Draper in America, and William and Margaret Huggins in England, had integrated the camera with the spectroscope (producing the spectrograph) which allowed scientists to observe and record much greater detail when observing the spectra of stars and other celestial objects.

While scientists knew the varied patterns of stellar spectra, they began to try to understand the physical significance of different types of spectra. In doing so they began to arrange them into spectral types and organized them into catalogues for study. Several women astronomers under the direction of Edward Pickering did the original classification work at Harvard College Observatory beginning in the 1880s. One such woman was Annie Cannon who, in her lifetime, catalogued over a half million stellar spectra. Later work by Cecilia Payne in the early 1930s explained the actual physics involved with how each element that appears in the stellar spectra are characteristic not only of what elements are contained in the atmospheres of the stars, but their abundances, and a stars' temperature as well.

With a telescope a person can observe details of lunar craters, planetary features, the wispy illuminated gases from nebulae, and the appearance of other galaxies outside our own. However, it is the invention of the spectrograph that has allowed the astronomer to identify the degree to which each form of matter exists in stars. It can discern stellar temperatures, a stars motion relative to us, their speed and how fast they rotate, their masses, if they contain magnetic fields, etc. The spectrograph can also detect the existence of multiple stars in a system when the resolution of the telescope by itself cannot.

So when you read details about the sun and stars, star clusters, nebulae, other galaxies, and even the age of the Universe, that information was acquired by the use of spectrographs ... breaking light into its many colors and analyzing what those colors mean.

Malpas teaches astronomy at Coconino Community College and is also a board member of the Coconino Astronomical Society.