New well north of I-40 to cost more than $1.6 million
Williams city officials still hoping Dogtown 1 Well can be salvaged 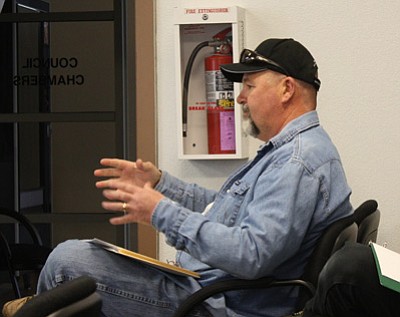 Pat Carpenter of A Quality Water Company discusses the council's drilling options for the new Sweetwater Well at the Jan. 29 meeting. Marissa Freireich/WGCN

WILLIAMS, Ariz. - Almost a year after entering into a water crisis, the city of Williams is ready to drill a new well at a cost of more than $1.6 million.

The city's new Sweetwater Well will be located on a 16-acre piece of city-owned property north of Interstate 40 on Airport Road.

Williams City Council members unanimously approved a proposal from United Drilling Inc. from New Mexico at their Jan. 29 meeting. Drilling the Sweetwater Well is expected to cost about $1,668,600.

Out of five drilling companies that the city contacted about putting together a bid, oil field drilling company United Drilling was the only one that submitted one.

"With only one bid it was kind of hard to compare, but my thoughts were it was going to come in close to these numbers anyway," said Pat Carpenter of A Quality Water Company, who is helping Williams with its water situation.

United Drilling has drilled three out of four of Williams' wells: Dogtown 3 Well and Rodeo Well, which are producing wells, and Dogtown 2, which turned out to be a dry hole. A different company drilled Dogtown 1 Well, which stopped producing in May.

"We're still waiting on Dogtown 1 and where are we on that," he said. "Those things come into play. I'm just praying that we hit water in Dogtown 1 and we don't have to throw too much more money at it."

Buchanan added that there are no guaranteed maximum prices when it comes to drilling a well.

Vice Mayor Don Dent pointed out that one of the items in the proposed price schedule factored in some money for correcting lost circulation and other hole problems.

"So there's a couple hundred thousand dollars calculated in there for problems because you know you're going to have them," he said. "Whether that's enough nobody knows."

United Drilling also listed an allowance for lost circulation, borehole problems and materials in its proposed price schedule that came out to $100,000, which was not included in the $1.6 million figure.

"With the experience we've had drilling wells around here and everyone else's experience, that is probably a number that is going to get used and maybe more," Carpenter said. "You always hope for the best but prepare for the worst on these wells."

The $1.6 million figure does not include the well equipment or test pumping. City Manager Brandon Buchanan estimated that the equipment, such as the pump and motor, would cost in the $200,000 to $300,000 range. However, the amount will depend on whether the city will be able to revive Dogtown 1 Well.

Councilman Lee Payne said although the possibility of Dogtown 1 coming back online would require the city to spend more money on equipment, it would be worth the expense to have another working well.

"I know the money is scary but that would be a good problem to have for me," he said.

One of the major decisions the city will have to make now is whether to put a louvered liner in the Sweetwater Well or whether to leave it as an open hole. The liner option would cost about $120,000 and was included in the $1.6 million total. Carpenter said Dogtown 1 Well does have the liner, while the Rodeo Well does not.

"That's just kind of different opinions from different people more or less," Carpenter said. "I don't really have an opinion one way or the other. From my experience with the wells most of them are open hole, but some people don't like open holes."

In Carpenter's opinion, the fact that Dogtown 1 has the lining has made it more difficult to remove the stuck equipment from the collapsed well.

City officials can wait until the hole is drilled and then decide whether to add the liner at that point based on what the cameras show.

"When they run the final video down there if there's big fractures in the limestone formation, then it might be a good idea to put the casing in it," Carpenter said.

Buchanan added that the decision may also depend on the gallons per minute the well is producing.

"If we're pulling, God willing, 4-500 gallons a minute and we're putting that much more stress on the formation, I would probably look a little harder at a liner versus at the 250 range where we're not putting quite as much stress on that formation," he said.

United Drilling is working on renewing its Arizona license with the Registrar of Contractors, but could probably be ready to mobilize within a week or two. United Drilling drilled the Rodeo Well in less than six weeks, according to Carpenter.