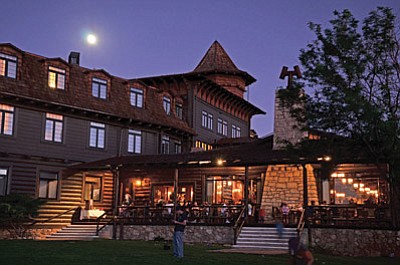 The El Tovar on the South Rim of Grand Canyon National Park is one of many lodging and hospitality facilities operated by concessionaires contracted by the park. Photo/NPS

GRAND CANYON, Ariz. - The names of more than 20 hotels and restaurants run by National Park concessionaire Xanterra South Rim L.L.C. face the possibility of trademark and patent rights by the concession company.

According to the Associated Press, Xanterra applied to trademark the names of many well-known restaurants and lodges in the park, including the El Tovar, Bright Angel Lodge and Phantom Ranch.

Xanterra filed the application with the patent and trademark office after not re-signing its long-term contract with the park. In October 2014 Xanterra filed a lawsuit against the park stating allegations that the contract the park offered raised franchise fees and provided inadequate employee housing.

After the long-term contract was put out to bid and received no responses, the park and Xanterra signed a temporary one-year contract. The temporary contract expires in January 2016.

The park and Xanterra share a long history, spanning over 90 years and according to Xanterra, many of the landmark buildings, including El Tovar, were built by the Fred Harvey Company - the foundation of what is today Xanterra Parks & Resorts.

According to Xanterra's website (www.Xanterra.com), Xanterra was originally founded as the Fred Harvey Company in 1876 and provided - through the railroad - a gateway for many guests to visit the Grand Canyon.

The train began taking guests to the Canyon in 1905 and continues today. It is still operated by Xanterra. The Grand Canyon would not be designated a national park for another twelve years.

Xanterra is now one of the largest national park concessionaires in the nation.

The Xanterra website stated that the company invested more than $200 million in capital improvements in the park, including lodging, employee housing, roads, trails, utilities, environmental upgrades and other infrastructure.

Xanterra declined to comment about the trademark application but did say in an email that this is one small piece of a much larger and complex relationship between Xanterra and the National Park Service.

The park said they are aware Xanterra filed a number of trademark applications with the patent and trademark office.

The patent and trademark office will publish the trademark applications and the park stated they will review them at that time.

Additionally, the park stated they would oppose any trademark application they believe to be inconsistent with the rights or legal interests of the United States.

Patent and trademark applications normally go out for public comment - at which point the park and the public will have the opportunity to review them.