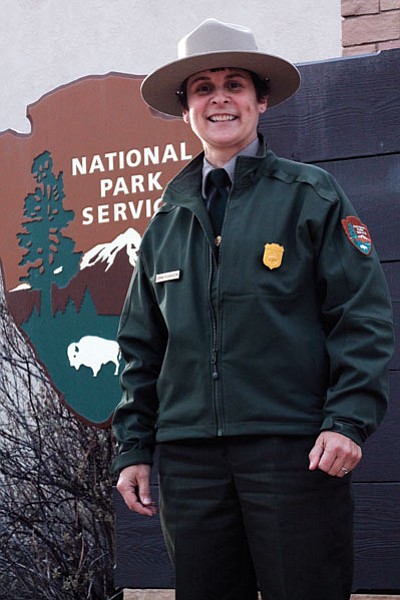 GRAND CANYON, Ariz. - Rangers are one of the first people visitors meet when entering Grand Canyon National Park and are the main point of access to Grand Canyon and park information throughout their visit.

"Volume wise, we make more contact and spend more time providing general information and orientation," she said. "But probably one of the most effective ways of reaching visitors is through our interpretive programs."

Richardson said when visitors come to the Canyon and get their first view it can be an inspirational and moving moment.

"It's amazing to stand up at Mather Point and see visitors approach the Canyon for the first time," she said. "You see all the range of emotion. People break down crying to laughing to just not being able to talk."

Helping visitors connect to the Canyon and see it as more than just a place is part of every ranger's job - especially interpretive rangers.

"People don't generally go there on their own. It's through facilitated discussions, ranger programs and talks," Richardson said. "Our role as rangers is to help visitors connect with the resources."

Richardson has always wanted to help people connect with their surroundings and by the age of six, she had found her calling.

Originally from New Hampshire, Richardson has always loved the outdoors. She would spend many days and nights hiking and camping with her parents in northern New Hampshire. It was during one of those trips that Richardson met her first park ranger.

"We were fishing on the Saco River, which we did all the time in the summer, and this ranger stopped and chatted with us. I'm sure his intention was to check my father's fishing license," Richardson remembered. "He stopped and started talking to us and spent over an hour talking with me about the fish in the river. Ever since then I wanted to be a ranger."

After deciding what career she wanted to pursue Richardson attended an agricultural high school and spent her junior and senior summers of high school working with the Youth Conservation Corp (YCC) program in state parks.

Richardson graduated valedictorian of her college class, earning a degree in environmental studies and education.

Richardson accepted the position - fulfilling her childhood dream of becoming a park ranger.

Over the next 24 years, Richardson worked her way from a seasonal position to chief of interpretation at Lowell.

In 2010, the position of deputy chief of interpretation at Grand Canyon opened and Richardson interviewed for the job. Within several months, Richardson, her husband and their adopted Cambodian twins, were on their way to Arizona.

In October of 2014, after the chief of interpretation retired, Richardson was promoted to chief of the division.

Over the last five years at the Grand Canyon and 24 years at Lowell, Richardson helped develop, facilitate and present numerous ranger programs and fostered the next generation of interpretive rangers. She has a close understanding of the ranger's role as both educator and interpreter.

"We like to think of interpretive rangers as both interpretive and educational. We look at (their role) from the general audience and general public and from visitors that come from all over the country and the world." Richardson said. "Their role is to help facilitate a connection between our visitors, from whatever background they're coming from."

Interpretive rangers dig deeper and share information with the public that is both educational and beneficial.

In order to help visitors connect with the Canyon, interpretive rangers facilitate programs and interact with guests in a variety of ways. Some of the most effective means of communication include 20 minute ranger talks, ranger work camps, three hour guided hikes into the Canyon and evening programs at the park's outdoor amphitheater or indoor auditorium.

Richardson said interpretive rangers work year round at the Canyon to develop and present special programs.

"Every season we try to provide a variety of types of programs because we realize everyone has different schedules and different interests," she said. "You have the visitors that come and have two hours and visitors who are here for a week vacation."

Every interpretive ranger develops their own program and it is up to them to decide what topic to discuss and at what length - wheather it will be a 20-minute ranger talk or a guided hike.

Popular talks rangers give range from geology and cultural and natural history programs to early pioneers at the Canyon but are not limited to those areas.

"They all develop their own programs," Richardson said. "Together, as a team, the whole division will identify topics and themes but each ranger will do it differently. Everyone develops their programs, their own outline and then work with their supervisors to refine that."

At these programs, the audience will meet with a ranger and discuss a topic based on the interests of the audience.

"Those are a little trickier to do and take a little more skilled interpreter," Richardson said. "You might get five different interests. Usually the audience will come together on one or two topics and they will all enjoy them but that is always a challenge."

While interpretive rangers provide the majority of talks and hikes, Richardson said all rangers are well versed in Canyon and park knowledge. Providing cross training between divisions of the park provide rangers with the tools needed.

As chief of interpretation, Richardson said she has strongly encouraged cross training.

"One thing I've been striving to do the last couple of years, ever since I came here, is to provide more cross training between divisions," she said. "So no matter what division you are in - if you are out on the rim, you're going to get asked questions and you have to be prepared."

One of the most fulfilling part of Richardson's position as chief has been to work with an outstanding and professional staff.

"(My) staff really has a good understanding of the complexities of the Grand Canyon as a park and the resources and the issues it faces - internal and external," she said. "They're all an extremely professional staff and it's a pleasure to work with them."

While Richardson said her responsibilities, as chief may not allow her to interact with visitors as often as she would like, she views that relationship as one of the most important aspects of her job.

"I like to get out there, I like to stay in touch with the visitors. They are why we are here," she said. "I think if you get too removed from that you don't take them into consideration when you are making your decisions. Plus that is what's fun."

In addition to her position at the park, Richardson and her family are actively involved in the Williams Mountaineer 4-H club - from leading the shooting sports program to serving as a superintendent at one of the 4-H barns at the county fair. Richardson is also an EMT and one of the captains at the Grand Canyon Fire Department as well as captain of the High Country Fire and Rescue, north of Williams.