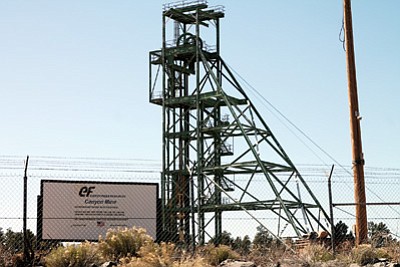 Canyon Mine on the South Rim of the Grand Canyon is one of three uranium mines seeking Air Quality Control Permits. Loretta Yerian/WGCN

GRAND CANYON, Ariz. - Environmental and conservation groups are requesting an extension to a public comment period for Air Quality Control Permits for the Canyon, Pinenut, and EZ uranium mines on the North and South Rims of the Grand Canyon. The current comment period closes Jan. 4.

Comments were submitted by the Grand Canyon Trust, the Center for Biological Diversity and Sierra Club's Grand Canyon Chapter regarding the permits. The groups are requesting an extension be given to the comment period stating in a recent press release that ADEQ did not allow enough time for public participation.

ADEQ issued a notice of the plan to renew the air-pollution permits in early December.

The mines, located around the Grand Canyon area, have been a point of tension between mine operators and environmental and other groups for some time.

According to ADEQ's draft permit for the mines, the permits are Class II Air Quality Control renewal permits that will be issued to mine operator, Energy Fuels Resources Inc.

For the Canyon and Pinenut Mines the permits state the proposed maximum mine production rates as 109,500 tons per year of uranium ore. The permit also states no ore is to be processed onsite and will be shipped to the White Mesa Mill near Blanding, Utah.

According to the ADEQ permit, Energy Fuels plans to reactivate and operate the EZ Mine. The other mines are operating. The maximum proposed mine production rate for EZ Mine is 146,000 tons of uranium ore per year and no ore is to be processed onsite. The ore will also be shipped to the White Mesa Mill.

Air Quality Control Permits are valid for five years from the date they are issued.

In addition to a request for an extension of the comment period, the environmental group's online comments also requested a public hearing. More information about the permits or to submit a comment can be found at ADEQ's website at http://azdeq.gov/cgi-bin/vertical.pl?d=2457359.