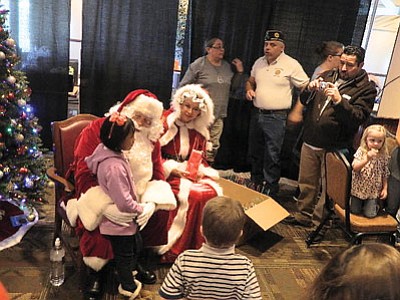 TUSAYAN, Ariz. - The Christmas program at the Squire Inn in Tusayan Dec. 17 hosted around 120 children from the pre-school at Kaibab Learning Center and kindergarten through third grade classes from Grand Canyon Elementary School.

Guests of honor for the event were Santa and Mrs. Claus.

This year's theme was "The Polar Express" and boasted decorations that were decked out with trains on the tables and railroad crossing signs. The animated film was shown on a TV for the children to enjoy. This event was co-hosted by the American Legion and American Legion Auxiliary from John Ivens Post 42,

Pre-school and kindergarteners also received knit scarves made by Rebecca Rocha and Mary Hoover from the American Legion Auxiliary of John Ivens Post 42.