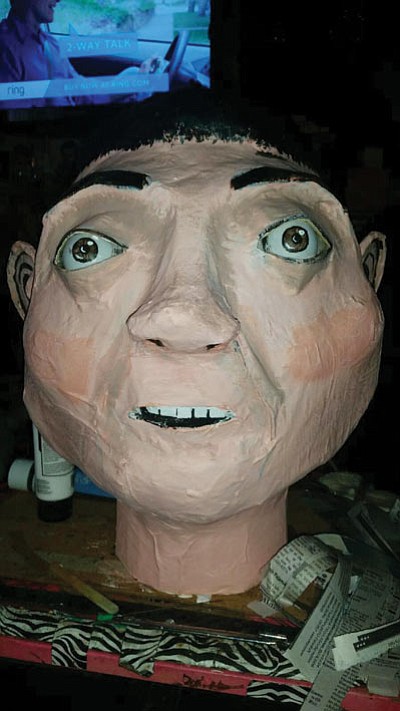 The effigy of the old year will burn at midnight on new Years Eve at Wild West Junction. Submitted photo

WILLIAMS, Ariz. - With few organized events planned for New Year's eve, members of the Williams community are hosting a gathering to kick off the New Year right with a celebration at Wild West Junction Dec. 31.

Father Killian McCaffrey from St. Joseph's Catholic church and the Wild West Junction restaurant are preparing an all day celebration to send off the old year and welcome in the new one.

"We're trying to provide foods from other countries," McCaffrey said. "For example, in Germany they have split pea and ham soup on New Year's eve. In Italy they serve cherry pastries. In Scotland they eat Haggis and Scotch Eggs."

Residents and visitors are encouraged to come to the all-day event. There will be family friendly activities for children, with a bear climbing a telegraph pole to mark New Year's Eve as it arrives in each country.

"There will be a picnic basket containing candies, honey and treats," McCaffrey said. "The bear will sit on the picnic basket and when it reaches the top of the pole the basket will be knocked over spilling the treats. Whoever catches the baby bear will have the honor of lighting the fire for the burning of the effigy."

The day will culminate with a burning of the effigy of the old year. McCaffrey said this is a 120-year-old tradition that began in Ecuador. He said they will build a life-size effigy called El Ano Viejo (The Old Year). The effigy will represent something from the old year that a person wants to put behind them. He wants guests to write down their negative experiences from the past year onto pieces of paper and pin them to the effigy. At midnight the effigy, as well as the things people wish to leave in the old year, will go up in flames. This way people can achieve closure and start fresh in the new year.

"Everyone attending is invited to write down all of the bad things they want to forget from 2015 and attach them to the effigy," McCaffrey said. "At midnight we will bring in the new year with bag pipes, drums, country music and dancing."

"Wearing brand new yellow underwear is also special on this night," McCaffrey said. "During the 1893 yellow fever epidemic, man people packed coffins with the clothes of the dead and set them in flames, the act being a symbol as well as a purification rite. They wore yellow underwear to forget the sad year and bring good luck and wealth in the coming year."