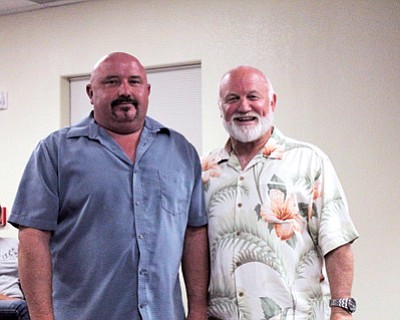 Based on a referendum put in place by the council last year, Sanderson will now step in as mayor of Tusayan.

Sanderson, who has served as vice mayor of Tusayan since 2014, will take the oath of office sometime after the first of the year, according to Tusayan Town Manager, Eric Duthie

Under direction from the town's attorney, council members accepted Bryan's resignation, effective Dec. 31, and approved Sanderson to take the role of mayor Jan. 1, 2016.

As long as Sanderson chooses to fulfill the duties of mayor, he will serve as mayor of Tusayan until the next election, set to take place in Aug. 2016 (during the primary election).

According to Duthie, council members will discuss the now vacant position of vice mayor and the open council seat at its Jan. 6 meeting,

Bryan, who has served as mayor since the town's incorporation in 2010, cited family issues and changing priorities as reasons for his resignation.

"I need to spend time with my family and recent events of losing family and others makes you appreciate and realize you have to have your priorities straight," he said. "There's not always another tomorrow."

During his time in Tusyan, Bryan also served as general manager for the Best Western Premiere Squire Inn in Tusayan in addition to chief operating officer and vice president of the company.

Upon his departure, Bryan said he believes he is leaving the town with solid leadership and said he is confident they will guide the town in accomplishing the goals laid out by town leadership at the time of incorporation. Bryan said he is proud to leave the town financially secure and has enjoyed seeing continued improvement in the overall aesthetics of the town.

"I strongly believe it is," he said. "As we look through some preliminary drafts of the documentation for our housing authority and a charitable foundation, I'm just really excited to have those things coming about. I think the town can move forward and be prepared for the access that it will eventually get."

Andy Jacobs, a representative for Stilo Development, who is seeking to build housing and commercial development on the Kaibab National Forest outside of Tusayan, said the development company was surprised to hear of Bryan's resignation.

"I knew he had one year left on his term, so I wasn't sure if he would run for re-election," Jacobs said. "It was a surprise, but I know he had moved on from his general management position at the Squire and in some ways it shows how tough it is to have a role in the community without (having) private property and housing."

"The goals we have as a community shouldn't be based upon one person," Bryan said. "If my departure significantly changes that course then I haven't done a good job as a leader in building a coalition of folks and clearly communicating what the goals are. We've worked hard to explain and share and bring people into the fold who share that vision and understand the dreams and reasons for that dream and how we need to move forward to get it done."

Jacobs agreed, saying that while Bryan's leadership helped lay the foundation for future leaders in the community, it does not change the company's goals.

"Mayor Bryan was a great mayor, if you look at where Tusayan was before the town incorporated, it has been very impressive to see the progress the town has made," Jacobs said. "I think that what he has done is laid the groundwork for future councils and future mayors to work with not only Stilo but all the other stakeholders in the area. I think the town is in good hands and from Stilo's perspective I think we will continue to have a good relationship with community stakeholders and whoever the new mayor and council members end up being in the years to come."

Bryan will continue to have responsibilities at the Squire Inn and said he will be visiting the community on occasion.

"I wish this community much continued success," Bryan said. "There's a lot of wonderful people here and this community has been exceptionally good to me in terms of its acceptance. I have learned and grown and matured because of living here in this small town. I leave a lot of good friends here and made a lot of good friends here. Even some of the controversy has helped me grow and gain a better perspective of life and relationships. I leave with a strong affection for the people and the place and a great appreciation for what it has given me."

Bryan is retiring to Cortez, Colorado where he and his wife own 11 acres of land overlooking Mesa Verde National Park.