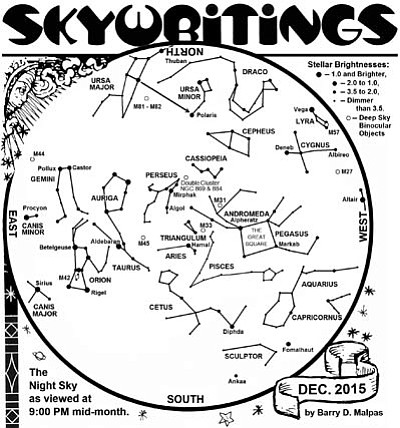 When reading an astronomical article, vast distances to various celestial objects such as stars, star clusters, and galaxies, to name a few, are often mentioned. But how are astronomers able to determine these distances since they cannot measure them directly?

Astronomers are relegated to being scientific detectives since they don't have the luxury of studying things in a laboratory, as in most other fields of science. They must use their knowledge of physics and chemistry, along with keen logical deduction, to construct mathematical models that will behave in a manner that will explain phenomena that can be observed. They must also use this logical reasoning to find ways to measure the dimensions of the universe. Since stars appear as points of light, even in the largest of telescopes, an overlapping chain of distance measurement techniques have been developed.

The first method is the geometrical distance measurement called parallax, which can measure only the closest stars within about 500 light years. Parallax is the apparent change in position of one of these "close" stars, as viewed against a background of exceedingly distant stars, when observed from two different locations in Earth's orbit. By measuring the amount of shift nearby stars make in photographs taken six months apart, astronomers are able to determine their distances.

One can easily observe this effect by holding a finger in front of ones eyes. By blinking your eyes, first left, then right. Your finger will appear to jump back and forth against the much farther wall. However, if you hold your finger out farther from your face, and again, blink back and forth, you will notice that the jump appears less pronounced. So, the smaller a star's "jump," or parallax, the farther is its distance from Earth.

Now, to continue outward, astronomers must use a Standard Candle to denote any type of object whose brightness is known at a standard distance. By observing an unknown star's spectrum and comparing with others of its kind, its actual Standard Candle brightness can then be determined. Since the observed brightness can be measured, the distance can be calculated by using the inverse square law. For example, if an object is twice as far as the standard, its brightness will be one-fourth that of the standard, if 10 times away, it will be 1/100th as bright, etc. This method is called "Spectroscopic Parallax" which can determine distances out to about 33,000 light years, to the center of our Milky Way galaxy.

One of the most interesting methods of measuring astronomical distances comes from the study of special stars, called Cepheid Variables (pronounced see-fee-id). Variables are stars that change in their brightness over time. Although not usually apparent to the casual viewer, there are a great number of them visible in the night sky. Cepheid Variables are special in that their light varies at regular periods over time depending on their size. When astronomers plot their brightness changes vs. time, the plot presents a distinct shape, somewhat like a shark's dorsal fin.

Henrietta Leavitt (1868-1921) was an astronomer at Harvard College Observatory during the late 19th and early 20th centuries. Her primary work was studying Cepheid Variables. By 1912, she established the light curves and periods for over two dozen of these stars in one of the Magellanic Clouds, two fuzzy patches observable in the southern hemisphere skies.

Leavitt discovered that a direct relationship existed between the period and the average luminosity (or brightness) of a Cepheid. Again, once the actual brightness of the stars were known, she was able to determine their distances compared to a known Cepheid Standard Candle, and also discovered that these objects outside of our own galaxy, were two dwarf galaxies, about 200,000 light years from us. This "Period-Luminosity" relationship of observing Cepheid Variable stars has been used to determine the distance to the Andromeda Galaxy, 2.5 million light years away, and other objects out to as far as 100 million light years.

The farthest objects that can be used as Standard Candles are Type Ia Supernovae, the cataclysmic interaction of special binary stars, which can reach an extreme brightness, and can be observed over 8 billion light years away. Although this method can provide distance measurements out to an estimated 5 billion light years, the uncertainty is believed to be about 5% over these vast distance ranges.

There are other distance measuring methods used by astronomers: Globular Clusters; RR Lyrae Variable Stars; and the Tully-Fisher Relation, a method based on galactic brightness and mass. All these techniques overlap and provide a basis of comparison to each other. However, it all starts with parallax and determining Standard Candles.