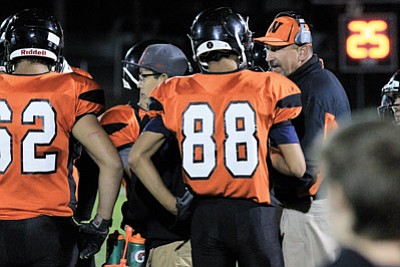 Coach Jeff Brownlee discusses a play with Viking Zack Perkins during a 2015-2016 game. Brownlee was selected as the Sectional Coach of the Year Dec. 5 by his fellow coaches. Wendy Howell/WGCN

WILLIAMS, Ariz. - Williams Vikings football head coach Jeff Brownlee was selected as the Section I coach of the year by his fellow section coaches Dec. 5.

The Arizona Interscholastic Association (AIA) recently announced the 2015-2016 coaches of the year and the all section first and second teams for football.

The AIA conducts a coach's poll soliciting nominations and selections for the coach of the year award and all-section teams. They have an opportunity to vote on varsity student-athletes and coaches within their section.

The AIA recognized the following Williams football players for the performance in the 2015-2016 season as selected by Section I coaches:

Voting for the AIA Division recognitions is in progress and the results will be announced Dec. 20.