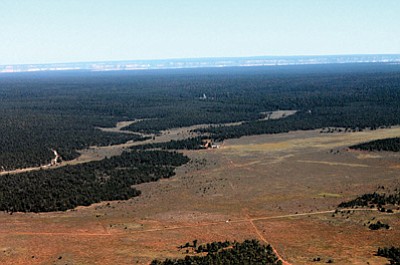 A portion of the Kaibab National Forest looking toward the Grand Canyon and Tusayan. Loretta Yerian/WGCN

The Arizona Game and Fish Department (AZGFD) is seeking information about the recent poaching on game management Unit 10 and is offering up to a $1,000 reward for information in this case.

"Evidence was collected at the scene, but help from the public will play a critical role in finding those responsible," said Noah Silva, wildlife manager. "This is not the act of a hunter. Poaching is a crime. It is important for anyone with information to come forward and help Game and Fish bring those responsible to justice."

Brandon Carley a law enforcement program manager with AZGFD out Kingman said poaching in unit is not common but does occasionally occur in unit 10.

"It happens and we do everything we can to try and catch people who are poaching but it's one officer who covers unit 10, that's from Seligman to Williams," he said. "That's a lot of area to cover for one guy. He does the best he can."

According to Carley, reasons for poaching vary but can include meat harvesting or antler collecting.

"It kind of runs the gamut," he said. "Not every poacher is the same, sometimes people are taking them just for the meat, we call those subsistent hunters where they need it for the meat - other times it's people who just want the antlers and they leave the meat and then other times they take the whole thing. It's all illegal one way or the other."

Callers with information can remain confidential upon request. Carley said rewards offered by Game and Fish are made possible through a Wildlife Prevention Theft Fund.

"If somebody poaches an animal and they get caught the commission can civilly assess them and that money goes back into this fund," he said. "We use that to pay out rewards for future cases."

"Sometimes we get a lot of good evidence and we can catch the poacher but sometimes there's not a lot to go on or witnesses a lot of time, so it's difficult to catch them," Carley said.