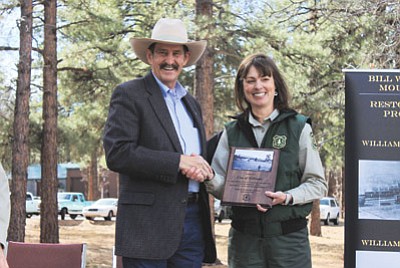 Above: Heather Provencio presents a plaque to Williams mayor John Moore during the signing of the Bill Williams Mountain Restoration plan Dec. 10. Provencio thanked the City of Williams for their support in the process. Below: Williams District Ranger Danelle Harrison signs the Final Record of Decision for the project. Wendy Howell/WGCN

WILLIAMS, Ariz. -After four years of planning and public comment, the Final Record of Decision for the Bill Williams Mountain Restoration Project was signed in a celebratory event Dec. 10 at the Williams Ranger District.

The approved plan allows forest workers to begin restorative treatments including thinning and burning in the overgrown forest on Bill Williams Mountain in Kaibab National Forest. Forest supervisors have been waiting for the Bill Williams project to be approved since 2012.

"The community of Williams recognizes the importance of treating the mountain and has worked with the Forest Service over the years to help us reach this milestone," said Williams District Ranger Danelle Harrison. "Now is the time to celebrate how far we've come together and to look ahead to getting treatments started on the ground as soon as possible."

Kaibab National Forest has recorded 366 fires over the past 40 years in the dense forest of Bill Williams Mountain and forest supervisors say it's just a matter of time before the residents of Williams experience a catastrophic fire in their backyard.

"Bill Williams Mountain is an incredible place," said Kaibab National Forest Supervisor Heather Provencio. "It's important to tribes, especially the Hopi, for cultural sites and collection of traditional plants. The watershed is hugely important to the community and wildlife. The Mexican Spotted Owl is also on the mountain."

The 359 page collaborative document was developed over a four-year period. Kaibab National Forest put on an open house and sought public comment related to the project, which were considered prior to finalizing the project.

"I compliment all the partners, the forest service and the local entities for working together," said Coconino County Supervisor Matt Ryan.

The Bill Williams Mountain Restorative Project is a part of the Four Forest Restorative Initiative (4FRI). The 4FRI spans 2.4 million forest acres across northern Arizona and is an effort to create landscape-scale restoration that includes reducing fuels, increasing forest health, and encouraging wildlife and plant diversity.

The first phase of 4FRI was approved in April 2015 and encompasses 600,000 acres on Coconino and Kaibab National Forests. Bill Williams Mountain was set aside by forest managers for special consideration due to the communication towers, historic and cultural properties, unique species and steep slopes.

"The consensus early on with 4FRI was to limit the scope of that analysis and work to slopes under 40 percent," said Timber Management Officer for the Williams and Tusayan Ranger Districts Micah Grondin. "The challenge of those slopes and different conditions really warranted a specific look at how to treat it."

Many residents remember the 2009 Twin Fire on Bill Williams Mountain that burned roughly 1,000 acres, closed local schools and required evacuation of 64 Williams homes. That fire along with the Eagle Rock Fire on Sitgreaves Mountain and the Schultz Fire on the San Francisco Peaks in 2010 prompted the need for immediate treatment of Bill Williams Mountain. The high-intensity wildfires of the Eagle Rock and Schultz fires led to flooding, erosion, and sediment problems as well as damage to landscapes and habitats. A child was killed in the subsequent flooding caused by the barren landscape.

"This district and the community realized that this was a high priority to get back to healthy and resilient conditions," Provencio said. "It (Bill Williams) hasn't seen much fire, so there's a lot of down and decadent wood. The canopy is far too tight also, so time is of the essence."

Forest supervisors say that a catastrophic wildfire on Bill Williams Mountain could cause the same damage as fires such as the Schultz or Aspen Fires. The 2003 Aspen Fire in Summerhaven, Arizona burned 345 structures and caused $4.1 million in damage to electric lines, phone lines, water facilities, streets and sewers.

Six watersheds begin on Bill Williams Mountain, including Sycamore and Hell Canyon watersheds to the south and east, Cataract Creek and Spring Valley watersheds to the north, and Ash Fork Draw and Upper Partridge Creek to the west. The city of Williams relies heavily on three of these watersheds to provide clean and abundant water to the local reservoirs as their municipal water source

"I remember when we first started talking about this project," said Williams Mayor John Moore. "We talked about getting this mountain cleaned off so it wouldn't just burn and destroy our water supply. I'm so proud it's done and the credit all goes to the Forest Service."

Harrison said cable logging was removed as a treatment option following input from stakeholders and the public.

"That was a concern with Fish and Wildlife and other stakeholders, so we took another look at it," she said. "When the project was originally proposed we did not have the same type of steep slope mechanized equipment that we have available to us today. So because of those advancements in technology we could take out cable logging without sacrificing acres that need to be treated."

Managers and stakeholders are concerned about any impacts to the Mexican Spotted Owl and the sensitive Bugbane plant population. The project addresses the sensitive habitat and allows for a buffer zone and protection zone for those species.

"So while we say we are going to treat every acre of that mountain, we are going to have to treat some of those acres differently in response to habitat concerns," Harrison said. "We want to make sure we protect those special areas up there."

Harrison said the Forest Service was eager to get the project approved, but managers wanted to ensure that the public and stakeholders were involved in the process. Many divisions within the forest service were involved with the process since the treatment will affect wildlife, soils, vegetation, fire management, and the watershed.

"It takes time to do an analysis," Harrison said. "And if you're going to provide for the opportunity for public comment and have them work with you on developing your proposed action and those alternatives, it's going to take some time."

Now that the project has been approved, forest managers will begin work on the lower slopes of the mountain within the next year. Managers are looking for help from outside entities to clear the upper mountain.

"The big challenge ahead of us is partnering with folks to be able to handle the mid-slopes and upper slopes," Harrison said. "The lower slopes of the mountain we can take out with regular timber sales, because the value of the timber is much greater. But elsewhere it's just some dead and down sticks that we'll have to pay people to take off the mountain.

Harrison said that it will take several years to complete the heavy treatments on the mountain and subsequent years will require maintenance treatments.

"My hope is that over the next several years we'll be chipping away at that mountain and we can look back in 10 to 15 years and say 'wow, that change is so evident,'" Harrison said.