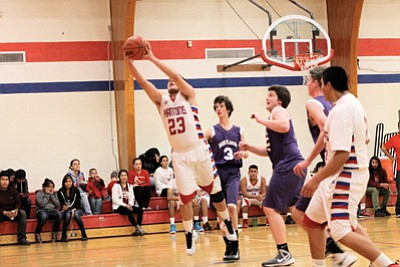 Grand Canyon’s Jorge Ramos leaps for the ball during the Dec. 12 game against Basis. Loretta Yerian/WGCN

Despite playing hard, the Phantoms walked away with a 24 - 53 loss.

Basis scored the first basket after a tough battle for the ball. By the end of the first quarter the score was 7 - 13 with Basis taking the lead. Ian Jones landed two baskets in the first half of the second quarter and by half time Basis landed a basket as the buzzer sounded, taking the score to 14 - 31. At the top of the third quarter Basis made a basket within the first minute. Phantom's player Ian Jones, had to sit out the third quarter after getting hit in the face, but came back in for the final quarter.

During the second half of the fourth quarter, the coaches made a substitution and rotated players. With eight seconds on the clock, Elijah Dugi took the final shot, leaving the final score at 24 - 53.