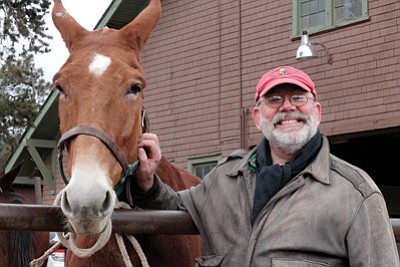 Thomas Ratz, a waiter at the El Tovar for the last 35 years with Ratz, the Grand Canyon mule that bears his name. Loretta Yerian/WGCN

GRAND CANYON, Ariz. - Thomas Ratz has worked at the Grand Canyon for over 35 years and his dedication has paid off in an uncommon honor - having one of Grand Canyon's world famous mules named after him.

"I like it," he said. "The mules are wonderful - I go see the mules because they're interesting animals and the mules are very important. There would be no trails without them and the mule rides are the iconic way of seeing the Grand Canyon."

On Dec. 11, Ratz stopped by the Grand Canyon Mule Barn to take a picture with the mule that now bears his name.

"I was a little surprised because I didn't know you could do that," Ratz said. "I didn't know what to say because I had never heard of that. Apparently they've done it a few times. The poor thing is going to be called Rats."

Ratz is a waiter at the El Tovar. A position he has held since 1980.

"I bartended a couple of months here and there, but other than that I've always been a waiter. It's a long time to be in the same place," he said. "It's because I have been here a long time (that a mule now bears his name) and I have an interest in the Canyon."

The interest Ratz has in the Canyon goes beyond working at the El Tovar for the last three decades. He is a collector of Canyon memorabilia, specifically photographs, letters, postcards and menus from the early 1900s.

"I've been here a really long time and I research and collect things about the Canyon," Ratz said. "I have a lot of resource material from the past."

Ratz purchases most of the items from eBay and said he started collecting after he picked up a few historical postcards and later a few menus from the El Tovar.

"Since I'm a server at the El Tovar I collect the menus," he said. "Breakfast, to me, is one of the more interesting meals because they would have (in the early 1900s) things you would never think you would have for breakfast."

Ratz said over the last 35 years he has seen a lot of people come and go, however, some of the biggest changes have been the steady influx in visitation.

"It's gotten busier," he said. "There used to be shoulder periods when it would get slow and they're not there anymore. Spring break has gotten really busy - March, April and May. October is really busy too."

Ratz, who is originally from Grand Rapids, Michigan, leaves the Canyon only rarely to visit family. He moved to the Canyon after he was one of the only people who applied and was accepted for a job at the El Tovar.

"There was a recession in Michigan and I wanted to go someplace else," he said. "That wasn't an easy choice."

Ratz said he had visited the Canyon before deciding taking the job and knew what to expect.

For Ratz, the best aspect about working at the Canyon for such an extended period of time is the job security it has given him.

"It's a very good job all year round, which most restaurant positions are not," he said. "They're all very seasonal - this one is not. When you're good at something you keep doing it."

Ratz said having a mule named after him is an honor. He plans to visit Ratz at the mule barn and said he may even go out for a ride sometime in January. Asked if he plans to stay at the Canyon, he said he doesn't plan on going anywhere anytime soon.

"If it doesn't fill up, I get a spot in the cemetery," he said. "There's the long range plan."