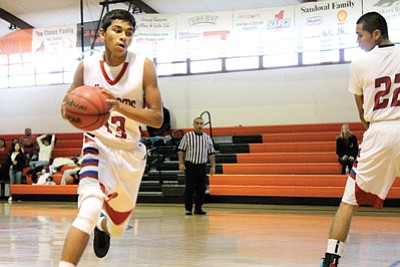 Nick Gomez takes the ball down the court during the tournament Dec. 5. Loretta Yerian/WGCN

GRAND CANYON, Ariz. - The Grand Canyon Phantoms went up against Seligman, Ash Fork and Joseph City during games played Dec. 3 and 4 before heading to Williams to play Basis Charter Dec. 5, for the final game of the Route 66 Holiday Classic.

The Phantoms walked away with a 34 - 69 loss against Basis. Phantom Head Coach Jeff King said despite the losees over the weekend, the team played strong.

"I told them it's early in the season and we're a young team, we've only got three seniors," he said.

During their game against Basis, Grand Canyon was nine to 18 with three fouls by the second quarter. At the top of the third quarter Basis scored twice within the first minute and a half, taking its score to 35. Grand Canyon got two fouls in the first half of the third quarter but came back with three points in the second half. The Phantoms kicked off the fourth quarter 21 - 57. Ian Jones made two baskets in the first two and a half minutes, taking the score to 27. Neego Kaska scored a basket before Jones took the final score to 34 with three free throws.

"Our shots weren't falling," King said. "We were getting hurt on rebounding, that was really killing us. They (Basis) were a tall team, we're a small team. They know how to outbox but they were getting out hustled."

As a first year boys basketball coach, King said he is learning how to work at their pace.

"I'm getting used to their system, because I'm used to the girls (style)," he said. "But I'm learning."

King said rebounding and passing were areas of improvement for the team although he thought the team's free throws were fairly solid at this point.

"We still have to work on our defense, transitioning and shifting," he said. "Otherwise it's mainly free throws and passing were both ok, they just couldn't get open shots to fall."

Since he is working with a young team, King said he is leaning on some of the seniors and more experienced players to be leaders.

Now that they've played the first games of the season, King said he plans to focus on rebounding and rotating for defense during practice.

Lady Phantoms win some, lose some at Williams Tourney

"They've been awesome, we won the last two and lost the first two," King said after games played against Seligman, Joseph City, San Pasquel and Ash Fork at the tournament.

The Lady Phantoms headed into their final game of the tourney Dec. 5 in Williams playing Chandler Prep. Walking away with a 29 - 36 loss.

It was the first time the Lady Phantoms have gone up against a Phoenix area school.

As head basketball coach for the Lady Phantoms and the head boy's coach, King said he has differnt approaches for the two teams. For the girls, he is focusing on transitions in defense and offense and fast breaks.

King said the areas the team are exceeding in are boxing out, passing and finding open players.

"They're really focused," he said. "Their main task is getting up to state."

King said he encourages the team to work hard during practice, reminding them the more they practice the better they become.

"It showed in the last two games and helped their confidence," he said.

King said he has high expectations for the seven seniors on the team and expects them to help lead the younger players on the team. Going up against Chandler, King encouraged them to keep in mind what they've been practicing and go with their new slogan.