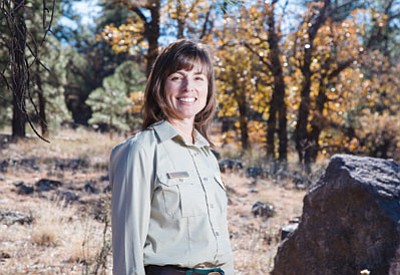 TUSAYAN, Ariz. - As the new supervisor of Kaibab National Forest, Heather Provencio is responsible for a colossal amount of forestland, 1.6 million acres to be exact. And Provencio said she believes she is the right woman for the job.

Provencio wanted to be in a position that would diversify her experiences and align with her values. She believes the Kaibab offers those opportunities.

"Between diversifying my experience and being in a place I knew was going to align with my values was really important to me," she said. "I feel really lucky to be here."

Provencio was born and raised in southern Illinois and grew up in a Forest Service family. However, she is no stranger to northern Arizona. Except for spending the last two years in Colorado, Provencio has called Arizona home since 1982, when she transferred as a sophomore to attend Northern Arizona University (NAU). Two years later she graduated with a degree in anthropology, with an archeology emphasis.

Even though Provencio's father was a researcher in the Forest Service, she did not plan to follow in his footsteps with a Forest Service career - it just sort of happened.

"I didn't know I was going to be an archaeologist," Provencio said. "I just wanted to come to Flagstaff and from there I just figured out the rest."

"My dad was Forest Service, but that was not the motivator. He worked in a lab and it never really dawned on me to do Forest Service," she said. "I had a friend who was on a fire crew on the Apache - Sitgreaves and every summer he said, 'you have to try it.'"

So she did. After graduation, Provencio got a job excavating at Piestewa Parkway. When the job ended she went to work with a fire crew on the Apache - Sitgreaves National Forest.

"I got on my first fire and I was hooked. I loved the Forest Service and our really broad mission and the fact I could do archeology and fire, and work with the public and education...I really took to it," she said. "Of course my dad was very proud, but it had nothing to do with it."

With her degrees, Provencio eventually worked as an archaeologist and tribal liaison for the Flagstaff Ranger District. She later received a master's degree in anthropology and spent seven years at the Red Rock Ranger District headquartered in Sedona, Arizona.

Prior to her new position on the Kaibab, Provencio was based out of Glenwood Springs, Colorado, where she served as deputy forest supervisor on the White River National Forest.

"In this day and age you look for great opportunities and apply for them," Provencio said. "I'm really picky on where I go and when this one came up I was like, 'this is one I really want to do,' so I applied."

Provencio was happy to make it back to northern Arizona. She has always loved the Kaibab National Forest and has spent time hiking, camping and exploring it's vast land mass.

"I was very excited, I really consider this home," she said. "We have a lot of family here, my daughter is in Flagstaff. Northern Arizona has always been a really special place to me, even as a little kid. It's great to be home."

Extending her energy, focusing on specific issues and learning to be available for all three districts is a balancing act.

"(There are) three different communities, so connecting with the communities and leaders ... every place has it's own personality and interests - that is a challenge," Provencio said. "Making sure I'm present at all of our units."

Provencio has a distinct leadership style, one that has served her well over the years.

Building community trust and establishing connections with stakeholders and entities who have vested interest in the forests in order to determine its needs is important to her.

"I get very focused on the people, the community, so I understand what they need, want, their interests and why they want those things. These are public lands and so delivering them in a way that's meaningful to folks (is important)" she said. "Striking the balance is always tricky but it really boils down to people and spending a lot of time on relationships and supporting and developing my employees. If I invest there I can help make a difference on the ground."

Learning to use her time and leadership skills will help her achieve both immediate and long-term goals.

"This is a really busy place," she said. "There are certainly a lot of issues to get up to speed on in a hurry."

Goals for the Kaibab

Provencio said the Kaibab has been given a lot of thought and care over the years and she hopes to continue the efforts already in place.

"I talked about aligning my values, so connecting our tribal partners with forest lands, connecting youth with public lands is something I want to continue to grow in this forest," she said. "What I'm hoping is more long term - helping people understand what public lands offer and how important they are."

She hopes to do this through a collaborative approach with partners, academia, tribal leaders and industry.

"We can't do it alone anymore," she said. "Our budgets are only so big and frankly I love working creatively that way."

One upcoming challenge for Provencio will be to make a decision on a road easement application submitted by the town of Tusayan for access to possible future developments in the community. The close proximity to Grand Canyon National Park has stirred up controversy around the development. More than 200,000 comments regarding the easement request from the public will not make Provencio's decision an easy one.

"There's the connection of course to a World Heritage Site and people's concerns over that and also the needs the town of Tusayan has over housing," she said. "So right now I'm talking to the town and the park, 'where do they stand?' and various environmental groups to get myself up to speed. Then we can figure out how to move forward."

Recently Provencio looked south from the top of Bill Williams Mountain and realized she had never been to the top to see the view. She quickly remedied that situation by visiting the summit.

Provencio has spent the first month at her new position learning what issues the Kaibab faces. One of the bigger issues in the Williams District is the dense forest and undergrowth on Bill Williams.

According to Jacqueline C. Banks, public affairs officer for the Kaibab National Forest, the Williams' community has noticed too. In December the Forest Service plans to officially sign an EIS for restoration on Bill Williams.

"That project is something the community has pushed for so long," Banks said.

Provencio said the Forest Service is excited to get the EIS signed and start work on the mountain.

"It really worries me to think about what could happen on Bill Williams Mountain if we had a big fire," Provencio said. "So getting up there and implementing on that mountain and making it more resilient to the fires we will inevitably get is really important."

Banks said the Forest Service hopes to start beginning restoration on the mountain in early 2016. The multi-year project will have some effect on the Williams community, including smoke on the mountain and in the community. Other goals in the Williams District will be to continue implementing the 4FRI initiative.

Working with inter-agency partners on the North Kaibab is important to Provencio, along with continuing work in industry and ensuring timber is marked and ready for treatment.

"We have a timber sale going on up there right now," Provencio said. "That's not part of 4FRI, so we are not getting additional funding for that."

"It's really critical that we work together," Provencio said. "I was really excited to meet with Superintendent Uberuaga and talk about our fire program."

Specifically on the North Kaibab and North Rim of Grand Canyon, the park and Forest Service work cohesively, sharing a fire organization and employees.

"For the Tusayan District and the northern most offices in Fredonia, spending time on those pieces of ground so I understand what we are doing and why (is important)," Provencio said. "Because I'm ultimately responsible and a decision maker on many projects. It's a long trip but making sure I schedule that face time is really important to me."

In her spare time Provencio spends time with family and enjoys running, hiking and being in the forests. Provencio's husband, also in the Forest Service, works in Flagstaff. The couple has two grown daughters.

"On weekends I'm out recreating and have been since 1982," she said. "Hiking up Kendrick and lots of trips up to the Canyon...the North Kaibab has always been a favorite spot to camp. I feel like I know it pretty well."