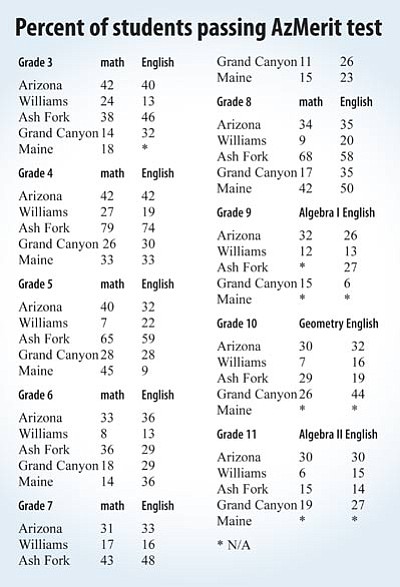 WILLIAMS, Ariz. - Although most school administrators in Arizona expected low scores on the new AzMerit standardized test, several northern Arizona educators were surprised with the results.

"The results are low, we know that," he said. "They are pretty much low across the board... They are a starting point and we need to focus on doing better with this year's testing and this year's curriculum."

Arizona public school students in third grade through high school are required to take the AzMerit test. Students in grades three through eight take an assessment in English language arts and mathematics at their grade level. Students taking high school level English and math take End-of-Course assessments that test their proficiency in those subjects.

In a press release, Superintendent of Public Instruction Diane Douglas said AzMerit was adopted by the Arizona Board of Education in November 2014 "allowing department staff and schools only a few months to prepare for the test before it was administered."

Honsinger said district administrators had provided information to parents over the past few months about the test. Administrators told parents that the results of AzMerit cannot be compared to previous AIMS test results, because they are completely different tests. They also told parents to expect that scores might be lower than expected because of a change in test formatting and different standards from previous years.

Honsinger said the Arizona Department of Education (AZED) advised schools that the results from the AzMerit test would likely be lower than the AIMS test results. He said despite that, he was still surprised by WUSD results.

"I knew we were going to be low, but I didn't think they would be that low," Honsinger said.

The Williams district was below the state average in percentage of student's passing in both the English and math tests in every grade.

Honsinger said the school district adopted the Beyond Textbooks curriculum last year, which is a comprehensive curriculum that has adapted to the Common Core and provides a curriculum calendar, lesson plans, testing, and many other resources.

According to Honsinger, many teachers did not fully utilize the program last year. He said some teachers were still directing their curriculum towards the AIMS test and the Common Core portion was left out. He said it takes several years to get the program up and running in the classroom.

"We have made great strides this year in implementing this curriculum in the classroom," he said. "We weren't in a good place at the beginning of this year and it's going to take us more than a year to get out of that."

Ash Fork School District has used the Beyond Textbooks curriculum for the past five years. Prior to using the program, Ash Fork was an underachieving school, according to Superintendent Seth Staples.

Staples said the change in curriculum and an improvement in school culture has had a significant impact on academic results in the school. Beyond Textbooks spreads the standards out throughout the year. Teachers instruct the concepts and have weekly assessments of the standards. If a student fails the assessment, they are re-taught the concept and tested again

"We identify the students who didn't master the standards and they work in small groups with teachers to master those standards," Staples said.

Ash Fork's AzMerit test results were near the state average in most grades, and some grades were well above average. Staples said he is pleased with the results, although he hopes to improve next year.

"We already had meetings and we went grade level by grade level and subject by subject and came up with action plans," he said. "Our school culture is that we're never really satisfied with our results, we are definitely hungry to improve them."

Maine Consolidated School District's test results were near the average in some grades and above average in others.

Maine Superintendent Mark Williams said he was not surprised with the results, but hopes to improve the scores in the future.

"I'm not happy," Williams said. "I'm trying to figure out what we need to do better. But we're going to keep going in the direction we're going."

Williams said he is not overly concerned with the test results. He looks at the test as a "snap shot of one moment in time." He said anytime a standardized test changes, there is always some realignment and reconfiguration needed. He said the school has done well on past standardized testing and has no plans to drastically change the way the school teaches.

"Every indication is that we're on the right road, we're doing what we need to be doing," Williams said. "We're heading in the direction of the Common Core, we've been doing so for several years. We use Engage NY curriculum, which is written to meet the Common Core standards. We like it, but we don't use it exclusively."

Williams said he is also waiting to see what AZED plans to do with future standardized testing. He said the AZED has plans to create their own standards and move away from the Common Core.

"I'm personally a huge supporter of the Common Core...I think they're good, but the board has said they're going to come up with their own standards," he said.

Grand Canyon School (GCS) was below the state average in almost every grade and subject tested, but administrators are confident that the percentage will increase.

With the help of Wing and the Beyond Textbook curriculum, along with a renewed dedication by faculty and staff, GCS administration believes next year's AzMerit scores will improve.

"Our focus and our long term goal over three years is to become number one in the state," said GCS Superintendent Shonny Bria.

Honsinger, Williams and Rowland all expressed concern about using the test results to make adjustments to their curriculum. Williams said the results they received had very little data, which made it difficult to find the concepts that the students were deficient on.

"AzMerit is an absolute flat score, when the parents got their profile of their child is just tells them you child scored this, which put them in one of four categories," Rowland said. "The old AIMS scores would have told you the real strengths and weaknesses, and I think the state has really done an injustice to (the students)."

This year's AzMerit scores are not tied to student grades or a graduation requirement, but do set a benchmark for how well students perform on the test.

Honsinger pointed out that the AzMerit requires higher order thinking. The test avoids exercises like recalling, repeating, finding, labeling, and identifying, which was the method predominantly used in previous standardized tests. He said the AzMerit test leans more toward exercises like analyzing, constructing, comparing, and proving.

"What we need to work on is what's actually produced, not just get it done," Honsinger said. "You've got to now show that you've really learned."