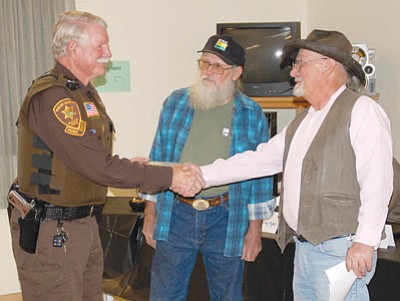 ASH FORK - Steve Edgar said he never panicked when he was shot on July 9.

Edgar, 69, is a Volunteer in Protection with the Yavapai County Sheriff's Office. He wears a uniform similar to those worn by sworn deputies, carries a gun in a holster, and drives a marked YCSO vehicle.

That's why Edgar was allegedly ambushed by two men - Gregory J. Niedermeyer, 49, and Jason D. Niedermeyer, 24 - who, officials say, believed he was a deputy sheriff when they lured him to a spot on their property where they had a clear line of fire and began shooting.

He was struck three times in the leg, but managed to get back to his Tahoe, call for help, and drive away. He was taken to Flagstaff Medical Center, where he made a full recovery.

Edgar, a retired airline pilot, credits that experience with his ability to keep a cool head while under fire.

"You train like your life depends on it, because it does," he said Thursday. "In the airlines, there was no room for panic. If you're at 30,000 feet and you have a problem, you revert to your training."

On Nov. 12, Edgar was given the Man of the Year award by the Juniperwood Landowner Association and the Community Action Network at a ceremony in Ash Fork.

He's been on the job since June, 2014, and, event organizer Dayle Rhodes said, often puts in over 100 unpaid hours a month.

Rhodes said that, when Edgar was shot, many residents of the Juniperwood area wanted to do something for him.

"But I said, 'You know what, it isn't about this event, as tragic as it was, it's about the fact that he's been here since June (2014) doing the volunteer work.'"

Rhodes said the Man of the Year award "makes sense."

Sheriff Scott Mascher was on hand for the ceremony, as were deputies and other volunteers.

When he heard that Edgar had been shot, he said, "The first call that I had was that we had an officer shot and I couldn't get an assessment as to his condition, so I stopped what I was doing...the whole agency basically came up here."

Mascher told the audience that he asked for a medical helicopter, but found Edgar had already been taken by ambulance to Flagstaff when he arrived in Ash Fork, and noted with a laugh that Edgar told him he was an airplane pilot and wouldn't go by helicopter.

Edgar said that, even as he lay in the hospital, he knew the shooting wouldn't keep him from continuing to volunteer.

"It never entered my mind," he said.

"My wife was not too happy about it," he added, grinning.

Asked if Edgar's shooting had any effect on the future of volunteers, the Sheriff was firm: "No. Not at all."

"The volunteers in Yavapai County are extremely critical to the Sheriff's Office," Mascher said. "We can't do many of the things we do without volunteers, so they're not in jeopardy at all."

He said he was "very, very grateful that this many people would show up (at the ceremony) to thank Steve.

"I think it's great that we have this community support," he said. "It is risky, it is dangerous, but the community stands by us."

"I feel like I have a purpose, supporting the deputies and the community," Edgar said. "I enjoy doing it. I just keep doing what I can."

Editor's Note: The Niedermeyers' case is still making its way through the court system.