Setting their own pace: Freedom in homeschooling 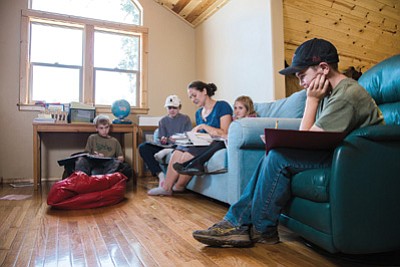 The Burlington family works on their school studies in their homeschool classroom in Williams. Ryan Williams/WGCN

WILLIAMS, Ariz. - It's 12:30 p.m. on a Thursday afternoon, and two kids are at a music lesson taking turns playing the piano.

One wears blue jeans and a ball cap, the other wears a purple skirt and leggings. The older one warms-up with his Hannon finger exercises while his teacher listens patiently. The younger one sits against the wall reading Miss Rumphius.

The scene seems normal, except for one thing. It's a weekday. At lunch time. Aren't these kids supposed to be in school?

The kids are in school. Kind of. They are homeschooled and can take music lessons in the middle of the day - or any time of the day.

"I can do school in my pajamas," said eleven-year-old Levi Burlington.

Levi and his three siblings are homeschooled by their mother. They live in Williams and are just 10 minutes from the nearest public school.

"We like to pick and choose what we want to do," said Levi's mother Marlene.

The Burlington family has homeschooled their kids for eight years. Marlene grew up in Williams and attended the public schools. Her husband, Bob, also grew up going to public schools.

The children have never attended public school and do a combination of online classes and mom taught curriculum. Marlene works directly with the kids in their early years until they learn to read and then slowly adds in outside and online classes.

"The first four years are extremely labor intensive for me," Marlene said, "My three boys have not been good readers and struggled to learn to read and write, although they do well in math."

Marlene said one of the main reasons the family homeschools is that they like their kids to be able to work at their own pace. Each of them has strengths and weaknesses in their learning and homeschooling allows her to match the curriculum to their ability.

"We just always do the next thing, there's no comparing to 30 other students," Marlene said. "I want to make sure my kids actually understand everything they are learning, I don't want them progressing through the grades or books without gaining understanding. We have the ability to put the brakes on if they are struggling with a concept."

The Burlington kids are what Marlene called "asynchronous."

The Burlingtons are involved with several outside activities which gives them an opportunity to mingle with other children. They attend Boy Scout meetings, take music lessons, and are part of a homeschool group. They also play sports such as baseball, soccer and golf. Caleb also played on the Williams Middle School basketball team.

"The social thing I don't find to be a big issue," Marlene said. "We stay busy outside the home."

"They will do science experiments, a history activity, math games and read books," Marlene said.

The Burlington's 13-year-old son, Caleb, has taken a biology and a literature class with the group. They made field trips to the Biosphere and JD Dam, and listened to several Forest Service presentations. The literature class included discussion, comprehension questions and essays.

"I read a lot of books (in the class); "Watership Down," "Through the Gates of Splendor," "Murder on the Orient Express," Caleb said.

The Burlingtons have also used their flexibility to spend time working and learning with their father who is a carpenter. They helped build the new house they live in and helped with other paid jobs of their father.

"We reroofed a house," Caleb said. "We helped with little things like... a wood floor I would cut the pieces to the right length for him. When he was digging footings, we helped him measure how deep they are so he doesn't have to get out of the backhoe."

Marlene said the family plans to continue homeschooling as long as the children continue making progress and it works for the family. She said that a homeschool diploma is much more readily accepted than it was even five years ago.

"The military accepts it and most colleges accept it," Marlene said. "They would still have to take SATs and ACTs like other students. I think it's more accepted now because it's not new and there have been many successful homeschool graduates."