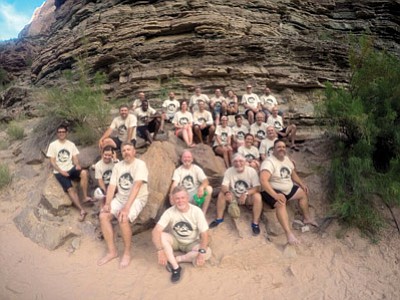 GRAND CANYON, Ariz. - Four therapists, a handful of river guides and 18 veterans - men and women, from 12 different states and representing all branches of the U.S. military spent one week on the Colorado River seeking adventure, camaraderie and healing.

All members of the group were chosen to participate in the trip by Canyon Heroes, an organization whose goal is to help veterans find emotional healing from the psychological effects of war.

The trip provides honorably discharged veterans the opportunity to participate in the weeklong river trip on the Colorado River through the Grand Canyon. The trip is funded by donations from foundations, organization and individuals and covers each veteran's transportation, lodging and rafting trip expenses. The rafting experience is co-sponsored by Hatch River Expeditions.

What makes Canyon Heroes trips different from other support organizations is their approach to helping veterans look beyond traumatic experiences.

For many veterans the trip was a once in a lifetime opportunity and a life changing experience.

"My eyes were wide open, I slept good, I ate good, everything about it was amazing," said Vietnam War veteran Elliot "JJ" Rubenfeld. "It was awesome - the people I was with, the program the way we did it, left me with plenty of positive thoughts, in fact I miss those guys."

According to Brooke, who has served twice as a counselor on the trip, one of the most important aspects of the journey is giving veterans a new outlook on their experiences.

According to Brooke, these symptoms can make emotional healing more difficult for those suffering from post traumatic stress disorder (PTSD).

Rubenfeld who is originally from Brooklyn, New York, joined the Marine Corps on his 17th birthday and served 14 months in Vietnam - he was wounded three times.

"When I went to Vietnam I was a reconnaissance Marine," he said. "The first five months, because my primary MOS (Military Occupational Specialty) was infantry, I ended up with the 5th Marines. I had the good fortune and unfortunate situation of being with Father (Vincent) Capodanno on Operation SWIFT (who got the) Medal of Honor from New York - (He was) the first priest to be killed in Vietnam."

Ever since Rubenfeld got out of the military he has suffered from PTSD and has sought help from neurologist and social workers.

"It just opened my eyes," he said. "One of the things they (counselors) talked about the last night was the fact that you have to think ahead, you have to take steps forward rather than constantly getting stuck with stuff that's behind you. I walked away with one of the most positive outlooks and I thought, 'There is life after this other stuff.'"

According to Brooke, being able to recognizing this reality gives veterans direction and helps them realize they can make meaning out of their experiences. The hope is that they can then go on to incorporate that idea into daily living.

"So you live a life in relation to the history of your experience instead of trying to run away from it. If you do that - that (can be) a pathway to wisdom and psychological and spiritual maturity. It's known as the warrior's path."

Although Brooke's role on the trip was serving as a therapist, his mission was not to speak the language of psychology, but to encourage veterans to view their experiences with new eyes.

With over 30 years of experience in working with veterans, Brooke is able to use his own experiences to relate to veterans. Originally from South Africa he spent the 1980s serving as a paratrooper in the South African Army and worked with servicemen during the conflicts in South Africa and servicemen returning from the war in Angola. These experiences helped him recognize that wounds and hurt from war related experiences are universal.

Michael Phillippi was selected to go on the trip, along with his uncle, John Stich, also a veteran. Phillippi served with the Pennsylvania and Virginia National Guard and was deployed to Iraq from 2004 to 2005.

For Phillippi, spending a week in the Canyon was both comforting and eye opening.

"I definitely learned not to take life for granted and it was also very humbling. You are just a small part of a big world," he said. "It also showed me a new appreciation for life. This is the first time I've ever done anything just for me and I really appreciated it."

"Veterans who come do understand that this is not a sponsored vacation because they're veterans," Brooke said. "They are coming for healing from the wounds of war."

According to Brooke, the healing effects of being in nature, specifically one of the world's seven wonders, along with being supported by like minded people, help immensely.

"There's a way that the Canyon's sort of indifference to us makes us feel very small, in a good way," Brooke said. "There's something liberating about experiencing that the world carries on and that our problems really are put into perspective."

Through research and follow up assessments, normally completed a year after the trip, Brooke says the trip has long lasting benefits for veterans.

He also believes society has done a much better job of recognizing wounded warriors - specifically by recognizing PTSD and offering support and treatments for those suffering emotionally and psychologically.

"That's better than what we did 30 and 40 years ago," he said. "We want to step outside of that (negative psychological perspectives) and help these folks see their experiences as a human universal."

For Rubenfeld, Phillipii and other veterans on the trip, Canyon Heroes offered something they had not experienced in many years - the chance to bond and view the world through the eyes of their comrades.

"We all clicked really well," Phillippi said. "It was like we all came together as a functioning unit and worked together so well."

"Before the whole thing was over, everybody knew everybody, we worked as a team and we helped each other," Rubenfeld said. "It was just like the people who served in the Marine Corps. We were doing the same thing there, except we were civilians doing it because we wanted to do it."

Canyon Heroes is currently taking applications for the 2016 trip.

More information can be found at canyonheroes.org.