A year in the making: Williams and Parks 4-H groups get ready for County Fair 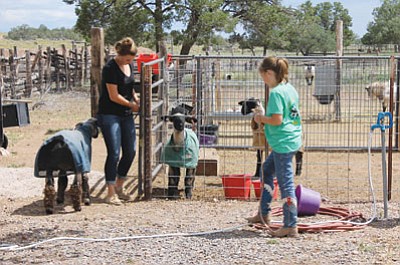 Three local 4-H groups plan to compete in confirmation and showmanship with their animals. Members are bringing steer, lambs, pigs, goats, rabbits and poultry to the fair.

The members purchased their animals last fall. They have spent the entire year feeding, grooming and exercising their animals in preparation for the fair and attend monthly 4-H meetings to learn about animal anatomy, care and feeding. They also learn how to present their animals.

Cole, Bailee and Ellie Cameron are members of the Cataract 4-H Club. They have participated in 4-H for several years. Cole has won two Grand Champion lamb awards, two Grand Champion goat awards and a Reserve Champion steer. This year he is raising a market hog.

"I love raising market lambs and steers," Bailee said. "I'm hoping to market my baby lambs to other 4-Hers in the future."

Ellie is in her first year of 4-H and is raising a lamb and a pig for the fair. She enjoys spending time with her 4-H friends.

"My favorite (animal) is a pig," Ellie said. "Because they are interesting and very funny."

The Coconino County Fair is a huge event for most of the families. Several of them stay the entire four days in

tents and campers on the fairgrounds.

The Mortensen family is entering five animals in the fair this year. They have been in 4-H for eight years with the Parks 4-H Club. Taya is a senior at Flagstaff High School and in her last year of 4-H. She has won showmanship awards almost every year she has participated in the fair. She has also won Grand Champion Steer twice.

"Showmanship is being judged on what you know about the animal," Taya said. "They look at how clean and groomed they are and judge you on showing the animals."

All of the Mortensens are showing steers this year. Taya is also showing a market pig and Sydnee a market lamb.

"The kids usually feed the steers 15-20 pounds of food a day," said their father, Troy.

"People don't realize how expensive it is to raise steer," said their mother, Kodi. "People look at the auction price and think it's a lot, but it costs about $3,000 or more to purchase and raise a steer."

Melissa Cameron, the leader of the Cataract 4-H Club is hoping more sponsors from Williams attend the fair this year.

"We send out buyer letters ahead of time," Melissa said. "The kids visit with people and shake hands. It's good advertisement for businesses when they come to the auction. The kids take really good care of the animals, it's a quality meat product for the consumer."

Alaina Karlsberger is a member of the Mountaineer 4-H Club. She has been in 4-H for four years and raises rabbits and poultry. This year she is showing an American Fuzzylop rabbit and a Bantam rooster.

"I feed and water them everyday," Karlsberger said. "I think a lot of it is the love you put into it and spending a lot of time with them."

Karlsberger and the rest of the Mountaineer 4-H Club were coached by Donna Wagoner for many years. Wagoner passed away recently and her loss is felt by many 4-H members.

"Win or lose I want to dedicate my 4-H year to her," Karlsberger said.

All of the 4-H Clubs hope that Williams residents and business owners show their support by attending the Coconino County Fair at Fort Tuthill County Park Sept. 4-7. More information is available at (928) 679-8000.