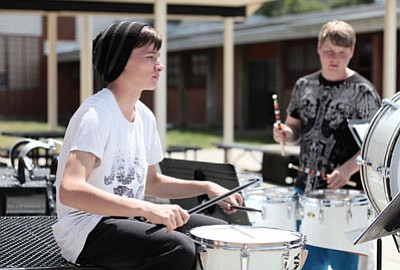 "We're in a much better position this year for sure," Stearns said. "We have a lot of returning players which helps. It's difficult trying to start a band across all levels and keep them motivated."

Stearns graduated from Northern Arizona University with a bachelor's degree in music education. Before she started working with WUSD, Stearns was teaching at a preschool and giving private lessons. This is her first stint teaching and/or directing a music program.

"It's been really hard," Stearns said. "But the fun part is I get to turn it into whatever I want. I didn't come into someone else's program that has to be this way or that way."

Now in her second season, Stearns is excited to see the improvement in her returning players and interest from new students. She's hoping that more students will become involved at a younger age so when they reach the high school level they can perform more advanced music.

"We have several brand new ones," Stearns said. "Hopefully in future years we'll get less of that at this level (high school)."

The elementary and middle students are learning to read music, follow a rhythm, and work as an ensemble. Stearns said they are working out how loud they need to be when they come together.

The middle school students are working on reading notes and beginning to work on pieces for a winter concert.

"We aren't doing marching, games or pep stuff there yet," Stearns said. "We might in the future, but that takes a lot of time."

Stearns has about 23 musicians returning this year at the high school. The band meets during second hour and is required to attend after school rehearsals. Each section spends a day together working on their pieces and the entire band meets on Wednesdays.

The high school band will play at pep rallies, parades, football games, and basketball games. They also will perform in a winter, spring and summer concert.

"We practice concert materials concurrently with pep stuff," Stearns said. "They get hit heavy. They have to do a lot of it on their own."

The school supplies some instruments, although Stearns said many of the high school musicians have their own. The school purchased a lot of band equipment last year and the staff was able to repair many instruments this summer.

"The science teacher, Mr. Lee, is helping me with that," Stearns said. "He is working on a proposal for wireless amps so the guitars can go on the field."

Stearns is trying to recruit students for all instruments needed in a marching band. She has most instruments covered but is still seeking a sousaphone player.

"A new cellist moved here this year," Stearns said. "I put her on the base drum since you can't march with a cello."